My favourite kind of Christmas superstition 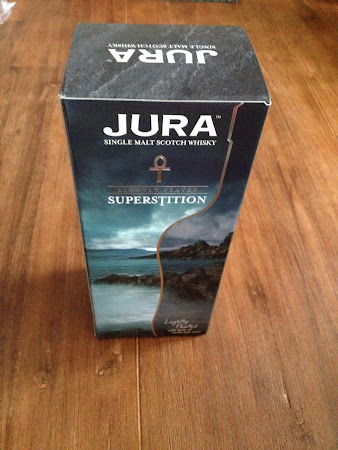 Christmas is a time full of superstitions and traditions from a variety of sources. Whilst I enjoy the odd tradition, I’m not generally a fan of superstition; we adopted a black cat, for example, I have been known to deliberately walk under ladders - after checking that it was safe to do so - and I have nothing against the number 13. One superstition I can get behind, however, is Jura Superstition, which I was fortunate enough to receive as a Christmas present from my lovely wife.

Superstition is Jura's "Lightly peated" whisky and is a bit less peaty than some of my favourites but very tasty and ever so drinkable.

Jura Superstition is crafted from a selection of the finest aged Jura single malt whiskies. This mysterious spirit has a unique style and character, with tastes of tangy cinnamon, ginger spice and honey with whispers of salty sea spray, rich coffee and roasted chestnuts.

At first, this description confused me as I thought that mixing a bunch of single malts would make it a blend rather than a single malt. I was (of course) wrong. According to Wikipedia:

To be called a single malt whisky in Scotland, a bottle may only contain whisky distilled from malted barley and produced at a single distillery. … If the bottle is the product of malt whiskies produced at more than one distillery, the whisky is called a blended malt or vatted malt, or pure malt. If a single malt is mixed with grain whisky, the result is a blended whisky. Single malts can be bottled by the distillery that produced them or by an independent bottler.

So, there you go.

Posted by Richard Edwards at 22:47