On Thursday we went to The Oar House in Howth, for the second time (www.oarhouse.ie). This is a fantastic (primarily) seafood restaurant on the West Pier of Howth, Co. Dublin. (Ireland.) This restaurant is great! It is definitely on my list of things to do when visiting Dublin. (If I still lived there, it would be on my list of things to do with visitors to Dublin but, sadly, I only discovered it a week or so before I moved back to England!) If the weather is good, then have a lovely day wandering around Howth and the headland, or visiting Ireland's Eye, before retiring for some top nosh. (Ring ahead though to book a table!) 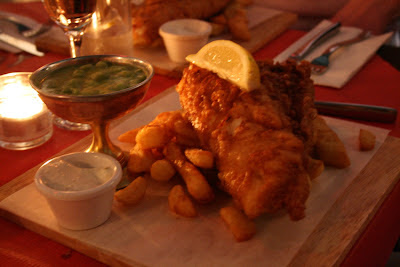 The fish and chips (pictured) are exactly how fish and chips should be. The only problem with them - and I say this having grown up in a British seaside holiday town - is that they might make all future fish and chips from other places rather disappointing! The Buffalo prawns (a bit like buffalo wings only in prawn form) are an absolute must-have. If you are alone, get them as a starter. If you are with someone else, as I was, I suggest getting a main course portion of buffalo prawns and a main course portion of something else (we had the always excellent Smokies) and share them between you. This way you get a couple of great sides too - the Sweet Potato Mash and Home Cut Chips work well with the Buffalo Prawn/Smokies combo.
Posted by Richard Edwards at 21:54 No comments:

We suffered at the hands of another "Fly mayBE" mishap today. Our plane was cancelled due to "operational reasons" following fog. Fair enough, perhaps, except that why was it only the international flights (Dublin, France, Channel Islands (semi-International)) that were cancelled, when everyone else - most of whom could have got a bus/train instead - got to fly (albeit late)? Why do FlyBE have it in for their foreign passengers? Or do they simple have a strange policy where the more inconvenient a cancellation will be, the more likely it is to occur?

A mystery. My advice, though: avoid FlyBE unless you have no other option. They are very unreliable and seem to have very poor contingency plans for when things go wrong. Which, in my experience with them over the past year, they do quite often!
Posted by Richard Edwards at 09:26 No comments:

Apparently, there is are one or more UK councils trying to rebrand Christmas as "Winterval". At first, this seems ridiculous but is it really? Let's face it, modern Christmas - as Christians nationwide berate every year - has less and less to do with Christ each year. Why not just dump the pretence and separate the capitalist money machine that starts earlier each year from the religious festival behind the name? Who knows, maybe re-branding Christmas itself would let people reassociate what "Christmas" is really supposed to be about, rather than simply what the Christmas holidays have come to represent?

Then, of course, one must not forget that Christmas itself (the festival, not the "event",) is simply a rebranding of the old pagan winter solstice festival. When Christianity swept the land and did away or assimilated all the old traditions, it was perfectly happy with such behaviour. Now, that it appears to be suffering the same at the hands of (albeit probably misguided) intentions to make the main public holiday of the year equally open to everyone irrespective of religion, it kicks up a fuss. Of course times, and therefore standards, have rightly changed since the Dark Ages but I cannot help but detect a whiff of hypocrisy.

Furthermore, many of the religious aspects of Christmas, namely the nativity, actually have very little to do with the actual biblical account of Christ's birth. (Assuming that even this is historically accurate, which is contentious to say the least. e.g. Luke timeline of famous figures does not appear to agree with contempories; Joseph is the son of Jacob in Matthew and the son of Heli in Luke etc.) If one moans that "Winterval" has nothing to do with the "true Christmas" then one should also do away with a lot of religious twaddle along with the commercial tat.
Posted by Richard Edwards at 02:18 No comments:

Learn while you wash 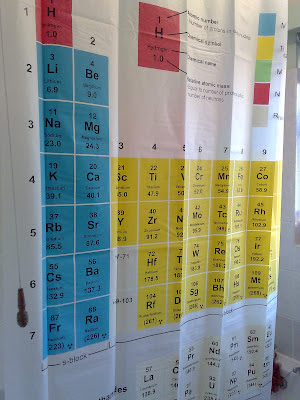 Having recently(ish) moved into a new flat, we have been lucky enough receive a couple of house-warming gifts. This has to take first prize... a Periodic Table shower curtain! Who knew such things existed?! Fantastic!

And the geeks shall inherit the earth... :o)
Posted by Richard Edwards at 20:51 No comments:

This is probably a weird topic to re-enter the blogging world with but I feel like adding some positivity to the world. (I have a bunch of rants saved up for next time I need to vent my spleen!)

Since we moved to Southampton, we have got our groceries from a combination of Tesco Online and the ASDA in town. Neither is totally ideal - the former ruling out spontaneity, and the latter being a bit, um, cheap and nasty. [Yes, I am a supermarket snob!] We were getting by but not really enjoying our food shop, until...

Yesterday, we discovered Waitrose in Portswood. It's great! It has so much nice food. Lots of good beer and wine. And it's clean and tidy and well laid out. And the staff are friendly and helpful. It just rocks! We ended up buying much more than we went for but it was all good.

To top it all off, at the end of the shop I was still trying to decide what to have for dinner. (We had got somewhat distracted by the greatness of the shop and all the wonderful foodstuffs they sell.) Then I discovered a little rack of recipe suggestions, complete with a list of exactly what to buy to make it. Within a couple of minutes, I had whizzed round and added the necessary bits and bobs for a very tasty italian meatball gnocchi dish. Yum yum.