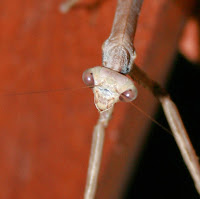 As well as cool reptiles, Australia also has some interesting insects that are not found in the UK. One of them paid us a visit on Saturday night: a mantis of some sort.

I'm not sure what species it was, and therefore whether it was technically a "praying mantis" or not. Hopefully, it was a preying mantis and will despatch a few of our less appreciated insect visitors, i.e. cockroaches!

It didn’t come into the house, which is a good thing because the cats seemed super-interested! Indeed, it was Arthur who drew our attention to it, spotting it on one of the outdoor chairs in the dark. 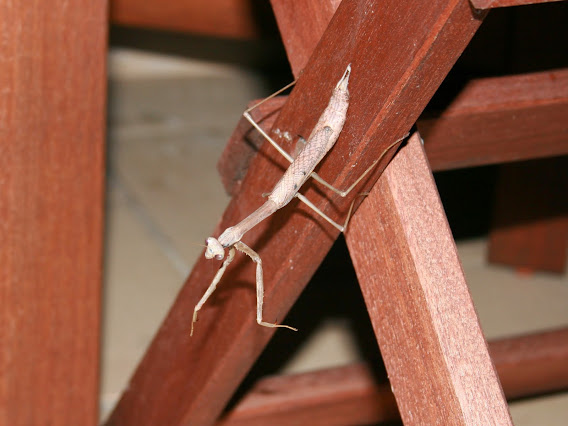 I went out to take a few pictures and it obligingly wandered over to the door to give the kitties a closer look. 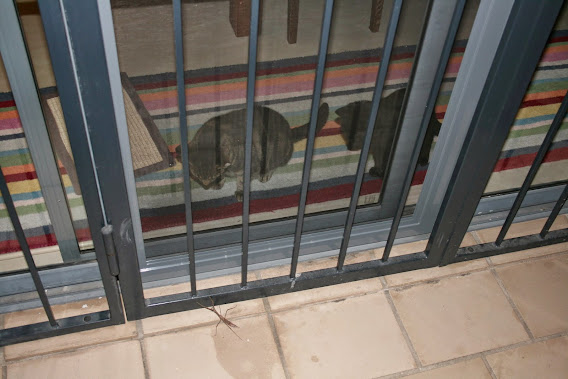 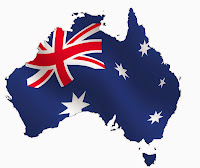 Posted by Richard Edwards at 16:00 No comments:

Last year, I went down with tonsillitis on New Year’s Eve. The timing sucked a bit but I guess there are no good times for such things to happen. However, I was/am lucky: lucky because I live in an age where antibiotics are available and still work.

As a scientist, I often get frustrated about science funding. Firstly, there’s not enough of it (compared to other endeavours of less benefit to both society and the economy) but secondly, a lot of it goes to the wrong places, namely human diseases such as cancer. Don’t get me wrong: I’d love to see cancer cured. It’s just that there are bigger fish to fry, and global crises looming that would make diseases of old age such as cancer and Alzheimer’s a bit of a moot point.

An obvious need of greater funding is climate change, thrown into the spotlight again (as if it were needed) by the confirmation that 2014 was the the warmest year on record. Another is the development of new antibiotics.

Antibiotic resistance is a big problem and one that is currently only getting worse. We are heading for a “post antibiotic world”, which is a really scary thought. Indeed, some scientists have argued that antibiotic resistance is a bigger problem than climate change because we have the technology to combat climate change, we just lack the political will. We do not yet have the technical solution to the impending “antibiotic apocalypse”, hence the real need to throw money at research into solutions.

The annoying thing is that this is not a problem that has snuck up on us. In an editorial from 1997 entitled “Antibiotic Armageddon”, Calvin Kunin from The Ohio State University wrote:

“The advances of the antimicrobial era are being dissipated by the emergence and spread of resistant microorganisms, the inevitable consequence of intense use of antibiotics in humans over the past 50 years. The process is accelerating in the community as well as in hospitals and is a problem worldwide. The attrition of older drugs is sustained by the selective effects of new and more expensive drugs developed to overcome resistance. Novel compounds will no doubt be discovered, but their demise is inevitable. It is just a matter of time until resistant pyogenic organisms join the opportunistic microbes as major threats to humans.”

“[The] long-term outlook for control of antibiotic resistance is bleak. There are simply too many physicians prescribing antibiotics casually and too many people buying antibiotics without a prescription in developing countries. There is only a thin red line of infectious diseases practitioners who have dedicated themselves to rational therapy and control of hospital infections. The issues need to be presented forcefully to the medical community and the public. Third-party payers must get the message that these programs can save lives as well as money.”

Sadly, if these words were written today, I don’t think anyone would argue the point; not much has changed. And that’s without even mentioning the big problems caused by the long-running over-use of antibiotics is agriculture.

Things are not without hope. Earlier this month, a Nature paper by Lin et al. reported the discovery of a novel class of antibiotic from a screen of 10,000 bacterial strains, following the development of novel method to grow hitherto uncultured bacteria:

“Antibiotic resistance is spreading faster than the introduction of new compounds into clinical practice, causing a public health crisis. Most antibiotics were produced by screening soil microorganisms, but this limited resource of cultivable bacteria was overmined by the 1960s. Synthetic approaches to produce antibiotics have been unable to replace this platform. Uncultured bacteria make up approximately 99% of all species in external environments, and are an untapped source of new antibiotics. We developed several methods to grow uncultured organisms by cultivation in situ or by using specific growth factors. Here we report a new antibiotic that we term teixobactin, discovered in a screen of uncultured bacteria. Teixobactin inhibits cell wall synthesis by binding to a highly conserved motif of lipid II (precursor of peptidoglycan) and lipid III (precursor of cell wall teichoic acid). We did not obtain any mutants of Staphylococcus aureus or Mycobacterium tuberculosis resistant to teixobactin. The properties of this compound suggest a path towards developing antibiotics that are likely to avoid development of resistance.”

Personally, I remain skeptical about claims that teixobactin is resistance-proof. It may not be easy but I am sure the bugs will stumble across a way to evade or destroy the toxin and evolve resistance. Nonetheless, the message is clear: there are new antibiotics out there to be found. This one was found in the backyard of one of the researchers! Bacteria have been killing each other for millions, maybe billions, of years and so the global diversity in nature is likely to be massive. We just need the ingenuity and funding to find them.

Posted by Richard Edwards at 12:56 No comments:

Via the Youtube channel of a friend from (but no longer in!) Dublin, Jonathan Gordon, here are some awesome videos of octopus camouflage. (Yes, I know that “octopuses” or “octopodes” is more correct for the plural but “octopi” is more fun!) I’ve seen this kind of thing on documentaries before but never realised this kind of thing could happen when just “[diving] down to look at a shell”.

The screenshots give the game away, sadly, but even when you know it’s there, the camouflage is still so amazing that the octopus is hard to spot.

And if that’s too scary for you, here is another video from Jon featuring an über-cute baby octopus “walking on the beach”:

Posted by Richard Edwards at 20:19 No comments:

One of the great things about living in Sydney is that you do not need to venture far from the city to find little pockets of National Park and bush tracks, where you can take a stroll away from the hustle and bustle. One such pocket is the headland at Shelly Beach, in Manly. 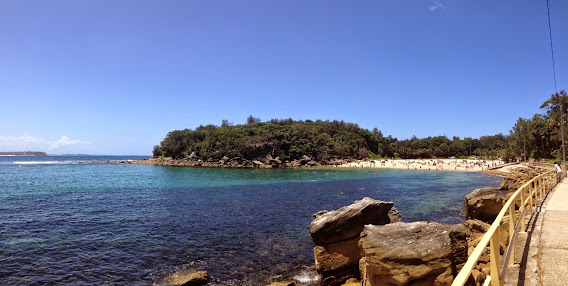 Last Friday, I took advantage of a day off to pay Shelly Beach a visit, and stumbled across this guy (or gal) on the headland: 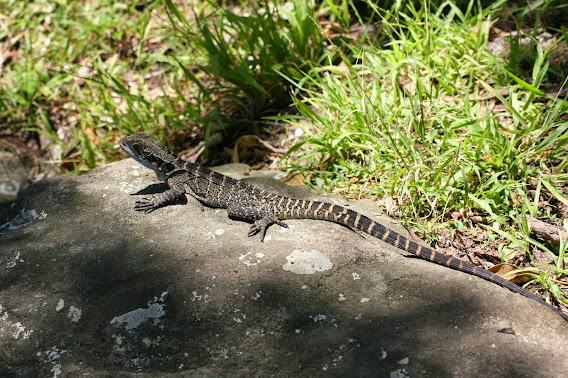 To be honest, I almost stumbled on him! He was good enough to hang around and pose for some close-ups. (A much larger one scared the bejaysus out of me when it bolted into the bush a little later!) 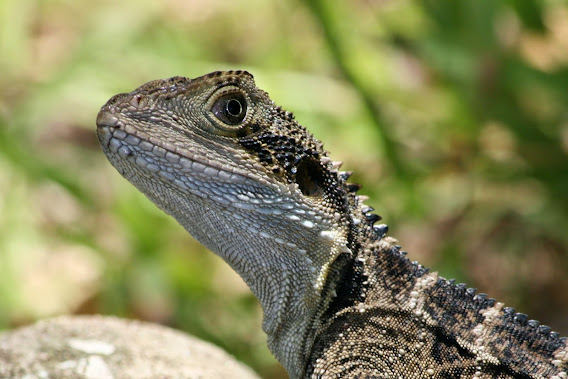 Judging from the signs up in the area, (s)he is an Eastern water dragon. I've never really noticed such prominent ear openings on lizards before. 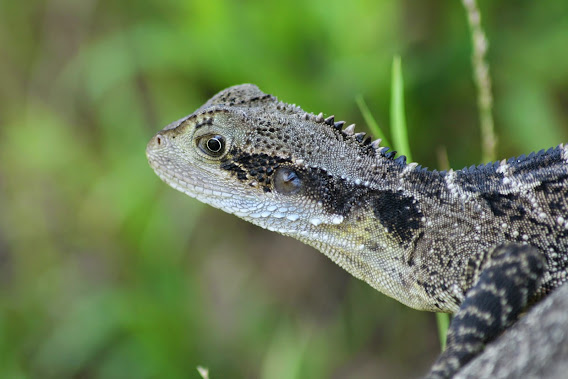 The UK has only 6 native reptile species, so it’s always a treat to see them. (Until, I suspect, I stumble across a venomous snake!) Fantastic creatures! 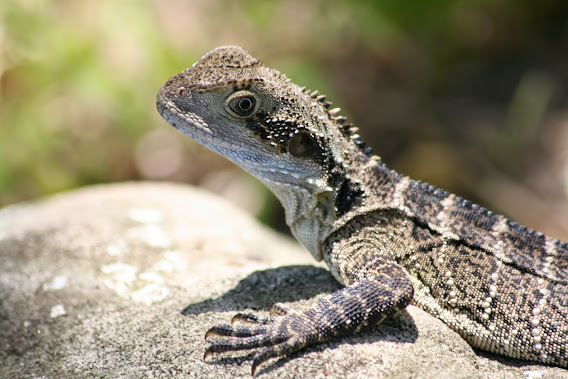 Posted by Richard Edwards at 19:33 No comments: 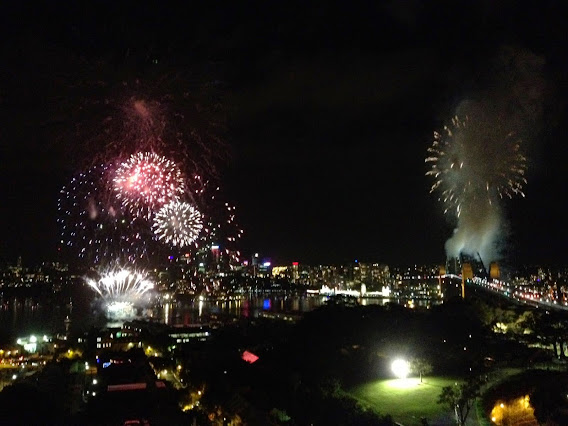 Posted by Richard Edwards at 02:09 No comments: