Yesterday we went out for dinner to celebrate Caitriona getting a job. (Yay!) We went to a Chinese restaurant in Southampton, called The Dragon Palace.

It looks a bit cheap on the way in as you have to go up two flights of fairly basic stairs that look like a fire escape. Once you get to the top, though, the restaurant itself is fairly well decked out. Most of the customers were Chinese, which is always a good sign.

The best thing about it, I think, was that it felt like it was a social hub for the Chinese community in Southampton, with a fair amount of coming and going and happy chatter. There was some kind of party going on in a small room off the main restaurant, near where we were sat. This was fun except for the occasional wail of karaoke that made it as far as our table!

The Dragon Palace does an evening eat-as-much-as-you-like buffet. We intended to order from the menu, as buffets aren't always that great, but it turned out to be a really good deal; it wasn't a buffet in the all-laid-out-and-help-yourself way. Instead, you simply ordered whatever you liked (basically a choice of the entire menu) and paid for anything you didn't eat. You could keep ordering little and often, if you liked. We just had starters and a main.

We had one of my favourite foods of all time: crispy aromatic duck pancakes with hoisin sauce. Mmmmm... And one of my other Chinese favourites, crispy seaweed. Not sure exactly what they do to the seaweed (fry it sugar?) but it's very tasty! The hot and sour soup was also very good. All-in-all, well worth a visit if you're ever in Southampton looking for Chinese food. Another time, we'll have to go for dim sum!
Posted by Richard Edwards at 09:42 No comments:

Today we had a little day trip to Winchester (on the bus). Winchester is lovely - a good mix of fairly narrow streets and old buildings, with great shops and nice places to eat. We'd been once before, to the Christmas Fair in the Cathedral grounds, but it was raining that day, so not quite so good for wandering around. Today was lovely a sunny, so much better for aimless meandering.

We had lunch in the Pitcher & Piano - part of pub chain that I last encountered when I lived in Nottingham. The Winchester Pitcher & Piano was not quite as grand as the Nottingham one, which is in an old church, but the food was very tasty. I had a lamb burger. Yum. Good chips too - you could tell they were once potatoes.

Instead of dessert, we got some lovely chocolates from Montezuma's. This shop is great and sells really tasty chocolate. I can particularly recommend Montezuma's Revenge (Dark chocolate, lime & chilli) and Tiger Tiger (Dark chocolate & vanilla).
Posted by Richard Edwards at 05:25 No comments: 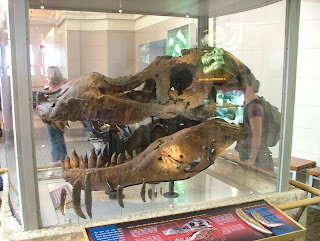 Sue is a Tyrannosaurus in The Field Museum - the largest specimen found to date, I believe. (Obviously, there are more Sues than this, but it is the Tyrannosaurus Sue to which I refer.) She is pretty big as you might imagine. (At 12.8m long, I doubt that any of the other Sues are bigger than her.) Sue's head has a display case all to itself in the museum (shown) and the one on the rest of the skeleton is a reconstruction (as are many of the other bones).

Right now, I am drinking from a Sue mug, bought in the afore-mentioned Field Museum. Like Sue herself, this is rather giant. Nice.
Posted by Richard Edwards at 08:03 No comments:

I'm one of life's procrastinators. I'm especially good at "activity displacement" - the performing of any task except the one that needs to be done in order to avoid doing something I don't want to do. Unfortunately, while stuff does get done, this means that I build up an accumulation of things that I don't want to do. Invariably, these are far worse in my head than in reality, and the days of thinking about how I don't want to do them sum up to more discomfort than just doing them in the first place.

Today, I just said "stuff it" and did a bunch of things I'd been putting off for ages. Now they are done and I can forget about them! Hoorah! It's much better to be a doer than a procrastinator. I suspect that this new attitude will only until bedtime but nevermind, eh?
Posted by Richard Edwards at 07:34 1 comment: