So what is "The Cabbages of Doom"? 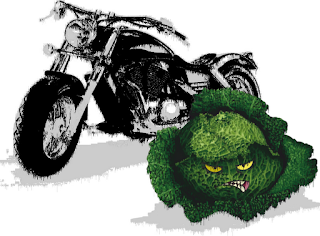 The Cabbages of Doom is a surreal story, which attempts to be amusing with variable success. A limited explanation of its origins can be found here or you can read the Blurb (below). The Cabbages of Doom has now been published on the Kindle (Amazon), as an e-book (Lulu.com), or as a PDF. A sample chapter (PDF) is available here.

Oh, The Cabbages of Doom contains some naughty words. Sorry.

“Ye gods!” thought Spike. "The Cabbages of Doom have come. Vengeance is upon us. I hope Mrs Gargrady has hoovered the cats, or all is lost."

For Cyril the Squirrel it was just another day. His main concern was the location of his nuts and the daily battle to avoid being eaten by something with nasty sharp bits and a taste for rodent. And then came The Cabbages of Doom.

Suddenly, Cyril found himself the key player in a struggle over time and space for his survival and the safety of those around him. Plus, if he's lucky, a bit of lovin' on the side. Take some marauding vegetables, add a menagerie of talking animals, then chuck in an army of chrome-plated midgets for good measure, and you have a story that will keep you amused and entertained* for, well, a few minutes. Maybe more.

*The author accepts no responsbility for readers that are neither amused nor entertained.

Reviews of The Cabbages of Doom:

This exciting and entertaining first novel exceeded all of my expectations. The story itself is a very imaginative chase across the English country side involving inter-dimensional travellers culminating in an entirely unpredictable hilarious and action packed final confrontation. The story had me laughing out loud and genuinely invested in routing for the good guys (okay, cabbage and small animals). Unlike most self-published first novels in this price range this one was very well spell-checked and surprisingly grammatically correct. If you are in the mood for a smile, a fun story and groan or two for some amazing puns and references to classic films, then this is the best 99p you can spend.

The sun smiled down on Spike and he smiled back, for it was a glorious day. The weather forecast at the beginning of the week had been for heavy drizzle with possible thunderstorms but these predictions had been pushed back and back to the point that Spike was almost convinced it would never happen. The sparse scattering of fluffy cotton-wool clouds that were currently ambling along in the jet stream looked anything but threatening. They were the kind of clouds that would help old ladies across the road. Spike had lived in Wales his whole life, however, and many experiences of leaving home in beautiful sunshine only to return soaked through to his jockstrap had taught him never to take the weather for granted. (Nor indeed did he take for granted the water retention of a Jackson & de Silva premium posing pouch.)
After pausing for a moment to wipe the sweat off his forehead onto the right sleeve of his lumberjack shirt, Spike skewered another bale of hay with his pitchfork. It was his proficiency with the pointy-pronged farm tool of yesteryear that had given him his nickname. (It was also a less proficient use of the aforementioned tool following one too many lagers in the King’s Armpits that had given him the big round scar on his right foot.) Nothing made Spike happier than spending his days here, stacking hay in the fields overlooking Swansea. Except, of course, for rogering buxom young locals behind the very same bales.
Distracted as he was by thoughts of the lovely Miss Jillian McCreedy, who worked in the haberdashery down Fleshpots Lane, Spike was surprised to feel the wind beginning to pick up. Stooping to place his skewered bale in its new location, he could just hear a faint rumble behind him to the North. His brow furrowed in mild confusion. Surely there could not be a thunderstorm after all, could there?
His confusion turned quickly to concern when he pulled his pitchfork from the hay and noticed lots of small blue sparks dancing along the prongs. Before he could ponder the meaning of this any further, there was a bright flash of light and a tremendous bang from up on the hill, followed by almost instantaneous calm all around. Spike slowly turned his back on Swansea and looked to the source of the disturbance. He was not prepared for what he was about to see.
“Bloody Hell.”
Where moments before there was nothing but fields, now there stood a shining, shimmering apparition, a swirling kaleidoscope of liquid colours, spewing out occasional sparks and bright flashes.
Of more immediate concern to Spike, it was also spewing out dozens of cabbages riding jet-black Harley-Davidsons. He stood transfixed as bike after bike issued forth onto the meadow. Then, with another bright flash and a loud ‘fffffffffffffttt’, the swirling mass disappeared.
“Ye gods!” thought Spike. "The Cabbages of Doom have come. Vengeance is upon us. I hope Mrs Gargrady has hoovered the cats, or all is lost."

Mystic Mog and the Exploding Tortoise

Work is now underway on a sequel, which involves many characters from the original plus a load of new ones.