Today, we had a day trip to London and experienced something very strange. All across the city, we spied people carrying yellow bags with M&M's on them as if they had been shopping in some form of M&M shop. Stranger still, it turned out that they had! They had all visited M&M's World, London. Described by World Chocolate Guide as "the largest candy store in the world", M&M's World London is 35,000 square feet of over-priced tat, spread over four stories. 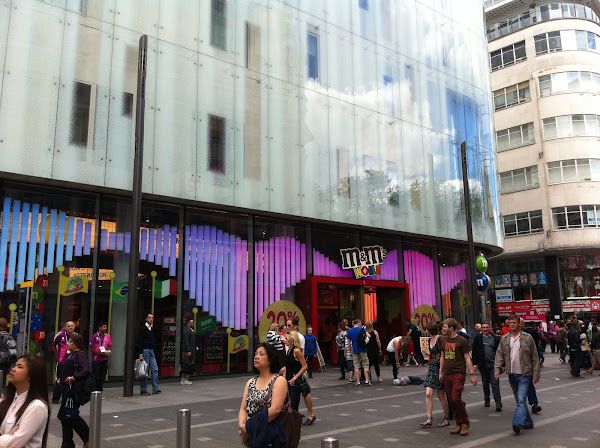 The only thing that is a bigger mystery to me that the fact that someone thought a four-storey 35,000 square foot shop selling nothing but M&M's merchandise was exactly what London's Leicester Square was missing is the fact that loads of people were buying said merchandise. Even more bizarre, people were getting their photo taken at various points inside the shop as if they were visiting some kind of national monument.

It felt like a scene out of Invasion of the Body Snatchers or something, where some kind of mind-controlling alien force is slowly taking over people one by one and soon we would be the only people left without a yellow bag full of M&M's in novelty-shaped boxes and slightly creepy soft toys of sweets in uniform.

Most annoying/strange of all, they didn't even seem to have a particularly massive range of M&M's. Sure, they had the regular M&M's in 24 different colours - great if you're decorating a cake or something - but we've been on the lookout for Mini M&M's (for decorating cup cakes) for a while and they didn't even stock them. Makes any claim to being "the largest candy store in the world" a bit weak, in my book. What they mean is "the largest candy-themed Merchandise store in the world". (Who even knew so many M&M's products existed?) 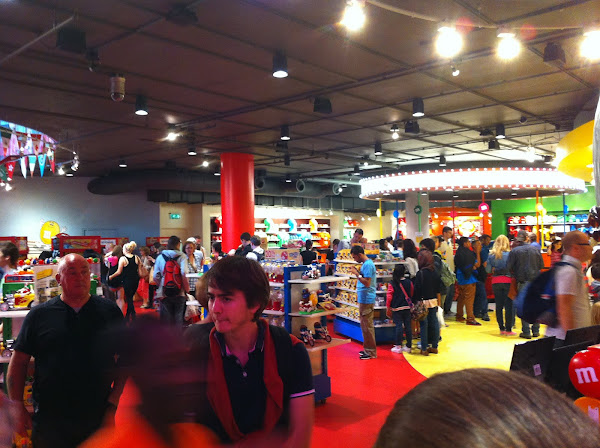 Still, at the end of the day, you have to have some grudging admiration for the Mars folk. Somehow, they have convinced the good people (tourists?) of London to advertise their candy and spend over the odds to do so. Pure Marketing Genius. (If you ever see me with a yellow M&M's bag, though, alert the authorities - the alien invasion is imminent!)

Posted by Richard Edwards at 08:19