Near the University on Burgess Road is Kairali, which is a great South Indian restaurant. (One without a website it seems.) A bit further along the road, on the corner of Hill Lane and Winchester Road, is Jehangir, an Indian and Bangladeshi restaurant and takeaway. Both are well worth a visit and both have their own charms but I am not going to say any more about either right now. Instead, I want to sing the praises of Kali Mirchi in Shirley - partly because it is long overdue, partly because I have just had a delectable Kali Mirchi takeaway for my dinner. 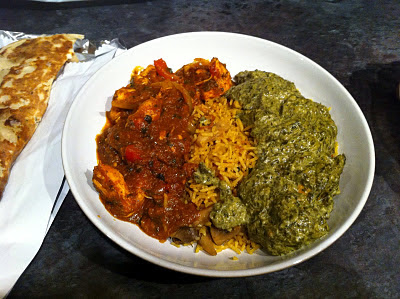 This place first caught my attention when a friend revealed that it was the #1 restaurant in Southampton, or possibly even Hampshire, on TripAdvisor. (It's currently #2 in Southampton, having been knocked off the top spot by another Indian restaurant, which I am yet to visit.) I think that the first time I went was when my brother came over to visit from Dublin in late 2010. I went back twice more in the next couple of weeks. It was that good.

The dish that really blew me away - and still a favourite - was the Chicken Tikka Malaidar. This is a spicy(ish), creamy, spinach dish; something that I don't think I've seen elsewhere and certainly hadn't tried before. (It's the green one in the picture, which is actually a greedy takeaway portion from two or three weeks ago!) The deliciousness of the Malaidar (also great with lamb tikka or paneer!) has sometimes made it hard to order other things but I may have a new favourite with the Tawa Murgh, "shredded chicken breast cooked on a hot plate with bell peppers in a smooth onion and tomato sauce". (It's the one on the other side of the mushroom rice in the picture. Fantastic Peshwari naan on the far left.) I also heartily recommend the Kadhai - with paneer, if you like Indian cheese. Mmmmmm!

I've now eaten in several times, in large groups and small, and got a few takeaways, both collections and deliveries, and it has always been great. The all-you-can-eat buffet lunch isn't bad, either. (Although I don't think you get Malaidar or Kadhai - at least, there was none the one time I have been at lunchtime.)

I do have one caution, however - don't order the Chicken Tikka Masala! At least, don't order it if you like the generic British coconut-rich Chicken Tikka Masala that (understandably) is Britain's favourite dish (allegedly) and is emulated by pubs and supermarkets across the land. Kali Mirchi, for whatever the reason (presumably the speciality region of India of the restaurant, or possibly even the authenticity of the food) is not that kind of curry house. To be honest, though, there are so many interesting and tasty dishes on the menu, it would almost be a crime to order Chicken Tikka Masala! (The same actually applies to Jehangir. If I fancy Chicken Tikka Masala, I tend to get it from somewhere a bit more "generic".)

In addition to not ordering Malaidar today (I went for Tawa Murgh and Lamb Biryani), I also made one other break from tradition today. I don't normally have wine with curry but there was a bottle of McGuigan Bin No. 528 open, so I figured I have some rather than the traditional lager. It was good! I think I will have to experiment more with curry and wine in future.

Posted by Richard Edwards at 09:58