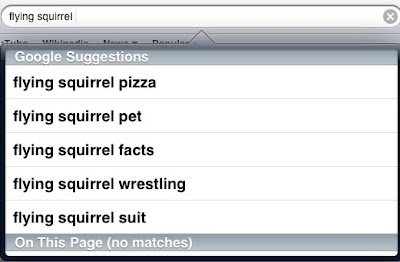 Following my earlier post on Flying Squid, I thought I'd do a bit of Google Psyche on the subject, just out of curiosity. I'd got as far as "flying squi", however, when I realised that flying squirrels were much more intriguing Google Psyche subjects!

I think "pet" and "facts" speak for them themselves. I had also known about the "flying squirrel suit", although I did not realise that it came in a "cuddly" Halloween variant.

The pizza is probably most disturbing thought but it turns out to be the name of a Seattle pizza restaurant, rather than a particularly avant garde topping. Meanwhile, "flying squirrel wrestling" is also not quite as cruel as it sounds but is instead the name of a wrestling move. What a weird and wonderful place the world is!
Posted by Richard Edwards at 08:10