Google Psyche: 'Dinosaurs Are Jesus Ponies' and other fun revelations

Thanks to Twitter (and Ed Yong), I just stumbled across "Google Psyche":

Google Psyche is an exploration of the stories that the world's Internet searches tell. The company's autocomplete algorithm predicts the word a random web searcher is most likely to type next, providing a statistical probe for our collective consciousness.

This week's offering is a search starting "Dinosaurs are...", which features (among other things) "Dinosaurs Are Jesus Ponies" at number 5.

I'm not entirely sure what this this tells us about our collective consciousness - it's just what people search a lot - and I really don't think that I would describe it as a "statistical probe" but it's still kind of interesting and fun. There must be a local factor in the Google search prediction algorithm, though, because the Jesus Ponies search does not appear in the top 5 for me:

I wonder if this says something about Americans! Of course, it could just be due to a famous quote that I am not aware of - according to the comments on the Google Psyche page, "Dinosaurs Were Made Up by the CIA to Discourage Time Travel" is a song by "Math the Band", which might account for number 3. 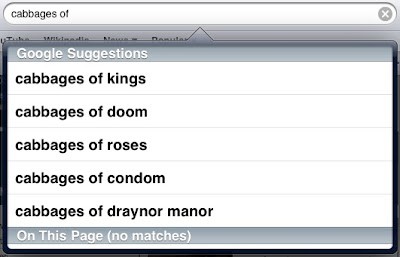 I tried it for "Cabbages of..." and was pleased to see "Doom" at number 2, although that might be just due to me lazily using the autocomplete to find my own homepage from time to time. I'm not sure what other people would get. Fourth on the list is very disturbing, though. The mind boggles.
Posted by Richard Edwards at 09:03