On a day that is looking like it will result in a possibly unprecedented level of Olympic medal success for "Team GB" (it's amazing that does not grate with me any more!), I thought another post of Olympic Pride was in order. As with my previous Olympics post, this is not about pride in my nation's atheletes, though. Instead, I want to give a hat-tip to the BBC.

The IOC seem to have gone out of their way to commercialise the crap out of the Olympics, which caused a lot of irritation during the build up. It is also obvious from some of the forum comments that I have browsed that this is still a big problem for some people - particularly, I think, for those in America who have to put up with what sounds like awful TV coverage by NBC.

At times like this, I realise just how lucky I am to live in the UK. Not only do we not have any time zone problems (well, except having to work during the day!) but we also have the perfect antidote to IOC commercialisation: the BBC. 24 HD channels of Olympic coverage, subscription free and advert free. Fantastic stuff! Actually, it's really more than this as the 24 HD channels are in addition to the normal BBC channels.

Possibly for this reason, I am enjoying this Olympics a lot more that the last two. Beijing always seemed very distant and there is definitely something to be said for sport being live. I know that, in theory, highlights should be more exciting as they are edited to show you the more exciting bits but, for some reason, it never seems to work out that way (for me) for Olympic events. (Except maybe the football and hockey.) I think it is the drama of seeing the underdogs and the atheletes who get personal bests and are pleased with sixth place. In 2004, I was in Australia during the games, which meant that not only was there a time zone issue but the TV stations I had access to were only showing events featuring Australians. For these reasons, I am definitely enjoying the Games much more this time around. 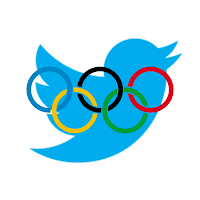 The other factor, I think, is Twitter. Not only has monitoring Twitter allowed me to enjoy the Nerdlympics but it also turns out to be a great way of catching up with the excitement of the day's events. Because people (and BBC Sport) tweet things as they happen, you can really capture a sense of the excitement, even if you are catching up with events a few hours later due to chores such as having to go to work during the day. Dara O'Briain's discovery of volleyball has also been fun to see develop!

As an added bonus, due to the childish nature of my sense of humour - and the necessary brevity of tweets - the BBC Sport feed sometimes throws up some mental images that make me smile. Favourites so far are references to Rebecca Adlington starting defence of her "800m Olympic crown” (that's a big crown!) and, more recently (and disturbingly):

Are they allowed to do that?! It certainly would be dramatic!

So, well done BBC (and Dara O'Briain) and keep up the good work! Another tweet has just alerted me to how good the BBC Sport app is, so I'm off to check that out now!
Posted by Richard Edwards at 03:29