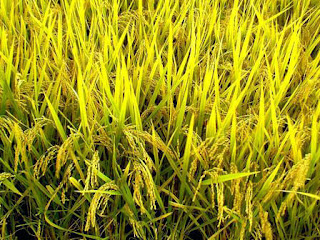 I don't like to name-and-shame on my blog (attack the idea, not the person) but I don't mind giving a positive shout out to those deserving of praise and I think one such person is Mark Lynas. Mark is an author, journalist and environmental activist. He has written a lot about climate change (in a pro-science, myth-busting way) but was also a very active anti-GM campaigner.

The corner of Twitter that I follow is alight with the fact that, last week, he delivered a frank admission that his anti-GM stance was wrong to an Oxford Farming Conference. I've not watched the video but the transcript on his website makes an interesting and inspiring read. The first three paragraphs are particularly hard-hitting:

"I want to start with some apologies. For the record, here and upfront, I apologise for having spent several years ripping up GM crops. I am also sorry that I helped to start the anti-GM movement back in the mid 1990s, and that I thereby assisted in demonising an important technological option which can be used to benefit the environment.

As an environmentalist, and someone who believes that everyone in this world has a right to a healthy and nutritious diet of their choosing, I could not have chosen a more counter-productive path. I now regret it completely.

So I guess you’ll be wondering – what happened between 1995 and now that made me not only change my mind but come here and admit it? Well, the answer is fairly simple: I discovered science, and in the process I hope I became a better environmentalist."

It's a pretty courageous admission to make, I think, especially given the later paragraph that gives some truth to what a lot of us in favour of a balanced approach to GM food have long suspected:

"This was also explicitly an anti-science movement. We employed a lot of imagery about scientists in their labs cackling demonically as they tinkered with the very building blocks of life. Hence the Frankenstein food tag – this absolutely was about deep-seated fears of scientific powers being used secretly for unnatural ends. What we didn’t realise at the time was that the real Frankenstein’s monster was not GM technology, but our reaction against it."

"So I did some reading. And I discovered that one by one my cherished beliefs about GM turned out to be little more than green urban myths.

I’d assumed that it would increase the use of chemicals. It turned out that pest-resistant cotton and maize needed less insecticide.

I’d assumed that GM benefited only the big companies. It turned out that billions of dollars of benefits were accruing to farmers needing fewer inputs.

I’d assumed that no-one wanted GM. Actually what happened was that Bt cotton was pirated into India and roundup ready soya into Brazil because farmers were so eager to use them.

What's worse, is not so much the myths themselves but the unwanted consequence of perpetuating those myths:

"Before [Norman] Borlaug died in 2009 he spent many years campaigning against those who for political and ideological reasons oppose modern innovation in agriculture. To quote: “If the naysayers do manage to stop agricultural biotechnology, they might actually precipitate the famines and the crisis of global biodiversity they have been predicting for nearly 40 years.”

And, thanks to supposedly environmental campaigns spread from affluent countries, we are perilously close to this position now. Biotechnology has not been stopped, but it has been made prohibitively expensive to all but the very biggest corporations.
...
There is a depressing irony here that the anti-biotech campaigners complain about GM crops only being marketed by big corporations when this is a situation they have done more than anyone to help bring about."

There's a lot in there dispelling some of the myths about the benefits of organic food too but, being a geneticist, I'm more interested in the Genetic Modification angle. I've already given some of my own views on (Standing up for Genetic Modification) so I won't repeat them here. I was not quite aware, however, just how much the anti-GM movement had stood in the way of progress, including the Golden Rice project that I mentioned in my previous post:

"The second example comes from China, where Greenpeace managed to trigger a national media panic by claiming that two dozen children had been used as human guinea pigs in a trial of GM golden rice. They gave no consideration to the fact that this rice is healthier, and could save thousands of children from vitamin A deficiency-related blindness and death each year.

What happened was that the three Chinese scientists named in the Greenpeace press release were publicly hounded and have since lost their jobs, and in an autocratic country like China they are at serious personal risk. Internationally because of over-regulation golden rice has already been on the shelf for over a decade, and thanks to the activities of groups like Greenpeace it may never become available to vitamin-deficient poor people.

This to my mind is immoral and inhumane, depriving the needy of something that would help them and their children because of the aesthetic preferences of rich people far away who are in no danger from Vitamin A shortage. Greenpeace is a $100-million a year multinational, and as such it has moral responsibilities just like any other large company.

The fact that golden rice was developed in the public sector and for public benefit cuts no ice with the antis. Take Rothamsted Research, whose director Maurice Moloney is speaking tomorrow. Last year Rothamsted began a trial of an aphid-resistant GM wheat which would need no pesticides to combat this serious pest.

Because it is GM the antis were determined to destroy it. They failed because of the courage of Professor John Pickett and his team, who took to YouTube and the media to tell the important story of why their research mattered and why it should not be trashed. They gathered thousands of signatures on a petition when the antis could only manage a couple of hundred, and the attempted destruction was a damp squib."

He also draws attention to another case that, having lived in Ireland for six years, was of particular interest to me:

"One final example is the sad story of the GM blight-resistant potato. This was being developed by both the Sainsbury Lab and Teagasc, a publicly-funded institute in Ireland – but the Irish Green Party, whose leader often attends this very conference, was so opposed that they even took out a court case against it.

This is despite the fact that the blight-resistant potato would save farmers from doing 15 fungicide sprays per season, that pollen transfer is not an issue because potatoes are clonally propagated and that the offending gene came from a wild relative of the potato.

There would have been a nice historical resonance to having a blight-resistant potato developed in Ireland, given the million or more who died due to the potato famine in the mid 19th century. It would have been a wonderful thing for Ireland to be the country that defeated blight. But thanks to the Irish Green Party, this is not to be."

There's a lot more in the post and I think that the lecture itself has more still, so I encourage you to go and read and/or listen to the post on Mark's website if you are even slightly convinced that blanket opposition to GM is a good thing. (The Science Museum has a fairly balanced intro to some of the pros and cons here. It is important to stress that GM is not always good nor is it the only solution to food security but it is a vital weapon in our arsenal against the duel threat of climate change and global over-population.)

The end is pretty hard-hitting too:

"So I challenge all of you today to question your beliefs in this area and to see whether they stand up to rational examination. Always ask for evidence, as the campaigning group Sense About Science advises, and make sure you go beyond the self-referential reports of campaigning NGOs.

But most important of all, farmers should be free to choose what kind of technologies they want to adopt. If you think the old ways are the best, that’s fine. You have that right.

What you don’t have the right to do is to stand in the way of others who hope and strive for ways of doing things differently, and hopefully better. Farmers who understand the pressures of a growing population and a warming world. Who understand that yields per hectare are the most important environmental metric. And who understand that technology never stops developing, and that even the fridge and the humble potato were new and scary once.

So my message to the anti-GM lobby, from the ranks of the British aristocrats and celebrity chefs to the US foodies to the peasant groups of India is this. You are entitled to your views. But you must know by now that they are not supported by science. We are coming to a crunch point, and for the sake of both people and the planet, now is the time for you to get out of the way and let the rest of us get on with feeding the world sustainably."

I think the message here goes well beyond the GM debate too. There are a lot of worthy causes to campaign for but it is always important to periodically re-visit and re-evaluate the evidence for and against any given position. (It is very rare for something to be all-good or all-bad.) Most important of all, one should always be willing and able to admit that one was wrong, as Mark Lynas has done.

h/t: Simon Singh. [Golden Rice Picture taken from the Genetic Literacy Project. (Although based on a Google search, the anti-GM lobby have all the good pictures!)]

Posted by Richard Edwards at 07:13