The Darkness are back! But I'd prefer a bit more lightness - this is NOT Spinal Tap! 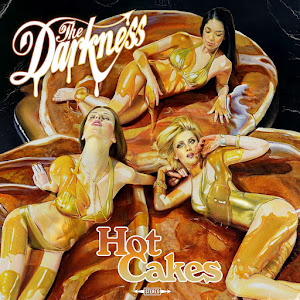 I have a certain fondness for The Darkness. I have Permission to Land and love a couple of the songs, whilst enjoying the remainder. For me, though, they are always at their best with a twinkle in their eye and approaching a parody of a rock band.

Their new album, Hot Cakes, is undeniably The Darkness - it sounds like them from beginning to end - and it certainly has some good rock music on it. I can't help being a little disappointed, though. I can't take them seriously enough to fully engage with serious material - even if the words are serious, the sound is not! At the same time, however, they seem to take themselves too seriously to fully embrace the tight-trousered silliness that they excel at - and that made them famous.

I think the album can be summed up by the fact that my favourite song on it is a cover of "Street Spirit (Fade Out)" by Radiohead. It's a really good cover! In fact, it's an excellent cover: it isn't a copy - it sounds like The Darkness through and through - and it rivals the original in quality. But they didn't write it and Radiohead songs have never really been known for their levity.

Hopefully, for their next album, they can harness their enthusiasm and talent to some epic song-writing that is up to the task. (Perhaps a collaboration with someone possessing the song-writing genius of Tim Minchin?) In the meantime, I can recommend "Street Spirit" (and maybe "Living Each Day Blind") but not much else at this point. (Maybe they're "growers"?) If you fancy some tongue-in-cheek glam rock: get a copy of the soundtrack to This is Spinal Tap!
Posted by Richard Edwards at 00:48