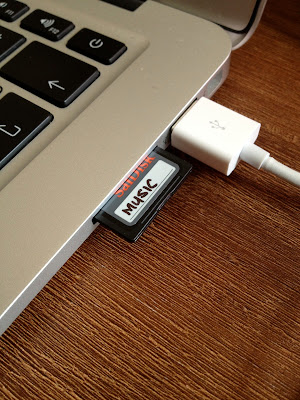 I’ve had my Macbook Air for over a year now (crazy how time flies) and I still love it. The only drawback really is the limited disk space - the price you pay for speedy flash storage. This would not be a problem were it not for the fact that I have accumulated a lot of photos and music over the years - far too much for the 128GB disk space.

Initially, I tried to get around this by having all my music on my MacBook but keeping photos on external media. This had two problems: (1) by the time that Apps etc. are included, iTunes was still cramping my space, and (2) it was inconvenient to keep plugging in external media every time I wanted to play with my photos, which, given their state of disorganisation at the time, was quite a lot! The problem was compounded further by iPhoto, which is an horrendous space-waster but useful with Photostream.

Plan 2 was to move my iTunes library to an external hard drive that I could plug in when syncing my iOS devices but otherwise not really worry about. This freed up lots of space for sorting out photos (though not all of them), which in turn allowed me to clean up and delete most of my iPhoto library in favour of using Picasa, which is altogether much more sensible in the way that it organises (and shares) pictures.

The problem with Plan 2, however, was that it made it really incovenient to listen to music/podcasts etc. and even to manipulate playlists and things if I was not entirely stably situated - not to mention the use of a USB port keeping the drive attached.

The obvious solution, which I had considered for a while but delayed due to cost, was to get an SD card big enough for my iTunes library and use this instead. As the picture above shows, SD cards do still stick out a little and so they do not provide the perfect permanent disk expansion that I first envisaged when I got my MacBook - I tried out a 32GB for a while - but they are considerably more securely attached than a portable hard drive, much easier to carry around and free up the USB ports for other things. I got myself a SanDisk Ultra 64GB SDXC card for about £40 and moved my iTunes library onto it. This is clearly more per GB than an external hard drive but pretty reasonable for the convenience - and it is convenient. Access times are pretty speedy and you can go for the Extreme SDXC card if such things worry you.

So far, it’s working out really well and I can heartily recommend it if you have similar Macbook Air storage issues. My only real fear is misplacing the SD card because it is so much smaller than a portable hard drive! As an added bonus, the Mac mini that I have just ordered for work has an SD slot too, so I’ll be able to take my whole library to work if I want to without having to use up valuable HD space on such frivolities! (In fact, it's worked so well that I’ve also ordered a 128GB card for working on both computers, which seems much more convenient (and faster) than using USB devices for the same purpose.)

Posted by Richard Edwards at 22:52