Goodbye Olympics. You were awesome. 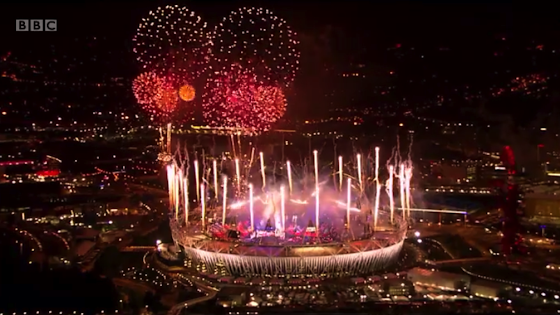 I have a confession to make. I enjoyed the closing ceremony. It was far from perfect. There were bits I didn't like. There were bits that made me cringe and want to hide behind the sofa. But, on the whole, I remember thinking it was a pretty good spectacle and filled the brief of a celebration with plenty of songs to "sing along too". 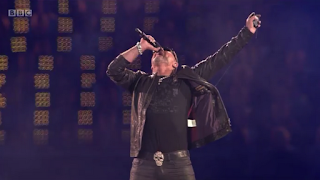 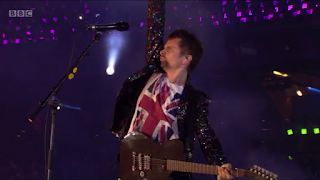 Since then, I've seen quite a lot moans and complaints about it. One article, which I won't link to because I don't want to promote it, went as far as describing the ceremony as dangerous because it so explicitly stuck two fingers up at the multicultural celebration of modern Britain that was the Opening Ceremony. Perhaps I am naive but I find it hard to interpret the event with such cynicism. What's more, I don't want to. The Olympics was up-lifting and buoyant and I'm not ready to come down to Earth with a jolt just yet. I don't want to go back to old moany Britain. I want to put on a Union Flag T-shirt and punch the air... metaphorically, at least.

I'm not going to pretend for a moment that the whole show was fantastic. Indeed, there was one moment - when the camera showed Boris Johnson "dad dancing" to the Spice Girls - that made me feel so embarrassed that I exclaimed "Oh no! The last two minutes have undone the whole Olympics!" But, I was joking. (Mostly!) A bit of "Mr Blue Sky" by E.L.O. and the Spice Girls were quickly forgotten. Besides, the Closing Ceremony wasn't for me, it was for everyone. There were probably just as many people watching who love the Spice Girls and don't like Muse as vice versa. 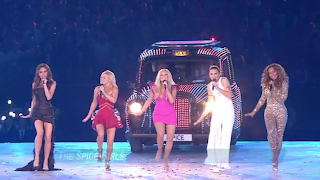 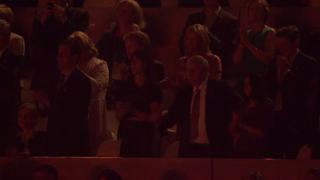 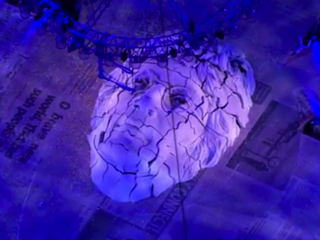 Some of the other choices were a bit odd, it is true. I thought there was something slightly ironic about John Lennon singing "Imagine there's no countries" to the Olympic Games but then, maybe, I'm being too cynical. The song, at the end of the day, is about unity and a "brotherhood of man" - if that's not pro-multicultural, what is? And the giant face was pretty cool too.

I'd also be interested who decided to book Oasis without the talented one. But this was balanced out by the epic guitar solo of Anita Dobson Brian May. Elbow. Madness on the back of truck. Eric Idle (up to the uncomfortable Indian part). Take That (in their best "sans Robbie" configuration). The percussive brilliance of Stomp. Not to mention the wonderfully surreal Annie Lennox riding through the stadium on some kind of weird Gothic warship from the Apocalypse. 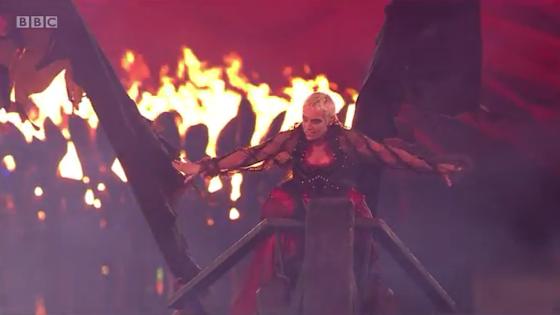 For me, though, the real star of the show (apart from the athletes and volunteers, who I will come to in a later post), was the stadium - and the lighting team. Although a bit gimmicky - and probably extravagantly expensive - the "pixels" were actually really cool. 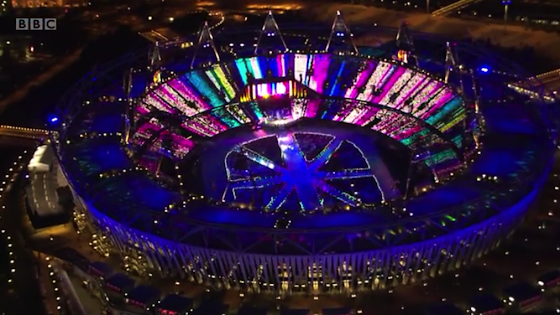 I liked the way the stadium went Green and Gold for the Brazilians following the handover. 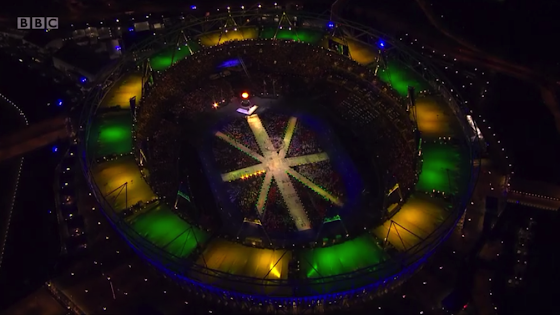 And I liked the way it ended up Red, White and Blue. 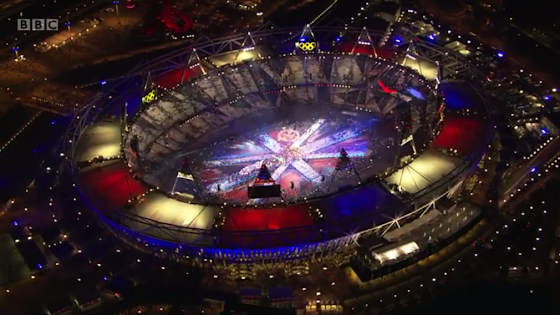 The bands (good and bad) - and the dancing (good and bad!) - are just memories by the morning but the stadium lives on to remind us that we held the Olympics in 2012 and it was awesome.

The Olympic legacy is what we make of it, not the Closing Ceremony. (Bring on the Paralympics!)
Posted by Richard Edwards at 07:12