Is belief in the Higgs boson an act of faith? 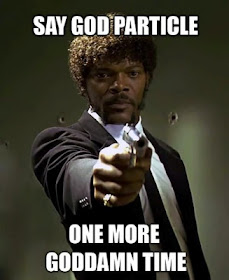 There's a slightly odd piece in the Nature "World View" column today: "Sometimes science must give way to religion". It's about what role the Higgs boson can play "in providing a rational explanation for the Universe" and an argument that we need religion too. [Picture credit: boingboing.net.]

Ed Yong tweeted "I'm not anti-religion but this piece doesn't make it's case". I would have to agree with him and it seems rather muddled to me. Take the last two paragraphs, for example:

"Challenges to the cultural and political authority of science continue to rise from both ideological and religious directions. It is tempting to dismiss these as manifestations of ignorance or scientific illiteracy. But I believe instead that they help to show us why it will always be necessary to have ways of understanding our world beyond the scientifically rational.

I am an atheist, and I fully recognize science’s indispensable role in advancing human prospects in ways both abstract and tangible. Yet, whereas the Higgs discovery gives me no access to insight about the mystery of existence, a walk through the magnificent temples of Angkor offers a glimpse of the unknowable and the inexplicable beyond the world of our experience."

The emphasis is mine. I have seen this and similar arguments before but they always seem to come down to this same point and I always have the same confusion/objection: how does "a glimpse of the unknowable and the inexplicable beyond the world of our experience" constitute a "way of understanding our world"? It doesn't. It just points out and/or explores stuff we don't know or understand. (Yet?) And why do we need religion for this role? What about art? Poetry? Science Fiction? (Science Fiction beats religion hands down in my experience!)

The statement that really made me baulk was this one, though:

"For those who cannot follow the mathematics, belief in the Higgs is an act of faith, not of rationality."

I have a similar issue with this as with the claim that Atheism requires faith and for similar reasons. I cannot follow the mathematics. (Well, I have never tried but I can take a good guess!) But then I am not sure that I can follow the mathematics necessary to engineer the MacBook I am now using, or to send Curiosity to Mars (and have it land safely!) or upteen other triumphs of modern science (especially if the word "quantum" is involved). But I don't need faith to believe that they are likely to be right, I just need trust. The Higgs is just an extension of that.

There is a big difference between faith in the unknown/unseen on the basis of some kind of "ancient wisdom" and trusting in the efforts of numerous real people applying methodologies that have yielded numerous empirically falsified results. Does that make science infallible? No. Does that mean that the scientists claiming we have discovered the Higgs boson cannot be wrong? No. But there is a "relativity of wrong" in science that just isn't found in faith and, as far as I can tell, is missing from most religion too. That an atheist can imply otherwise - and in Nature of all places - beggars belief a little.

I'm not a subscriber to the school of thought that science and religion are necessarily incompatible, although I think it is vital in this context to define which religion before entering such a debate. I do, however, agree with the notion that religion does not provide "another way of knowing" and this article does nothing to convince me otherwise.
Posted by Richard Edwards at 01:13