Fruit bats in the Art Gallery of NSW 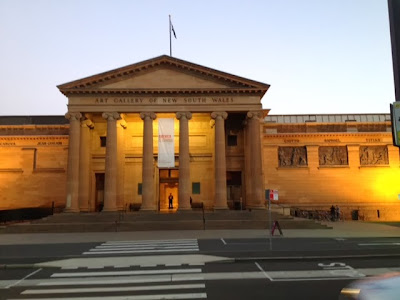 This evening, we visited the Art Gallery of New South Wales, which is open “after hours” on Wednesday with free entry and live music. Free wifi too! It’s a great gallery with a mix of Australian and European art, contemporary and old, painted and sculpted, including my new favourite sculpture: 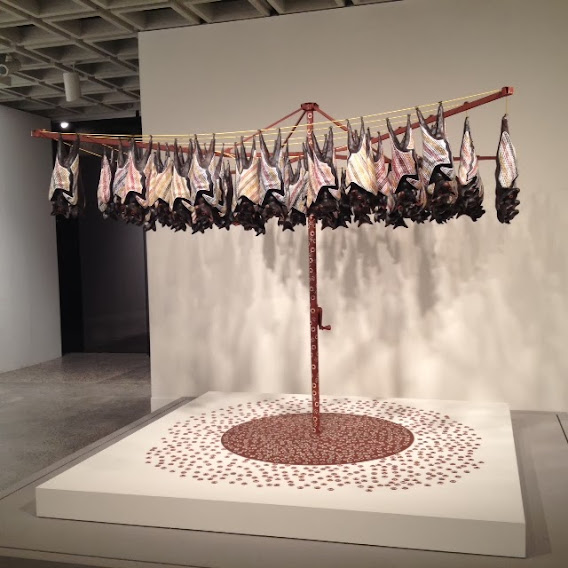 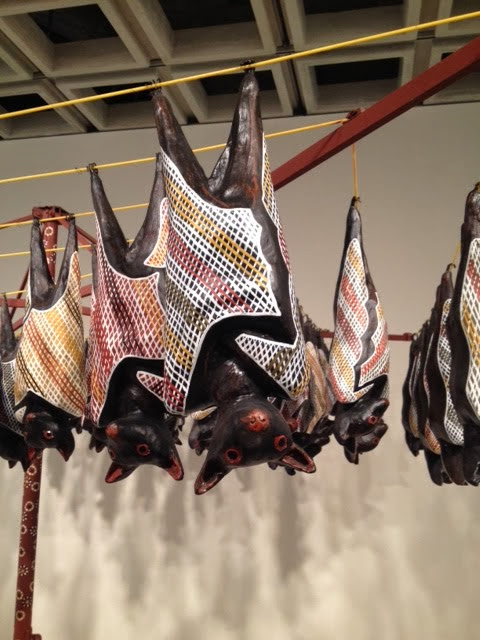 Worth a visit for that alone!

The Joy of Jacaranda trees 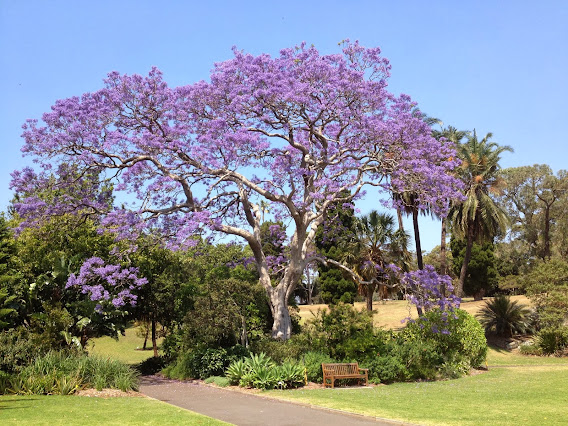 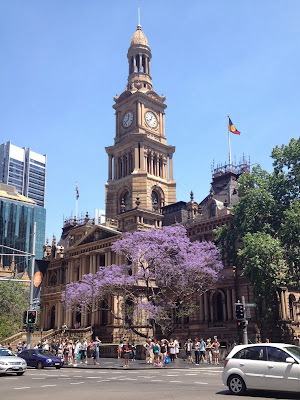 One of the things that first struck us when we arrived in Sydney were the amazing purple trees that could be seen around the place. Although not native to Australia, Jacaranda trees can be found all over Sydney and really stand out with their amazing purple blossom. Sometimes, when the wind blows hard, it looks like purple snow falling to earth.

I don’t really have much to say about them other than I think that they are awesome!

[Top and Bottom, Jacaranda standing out at the Botanical Gardens; Right, Jacaranda outside Sydney Town Hall.] 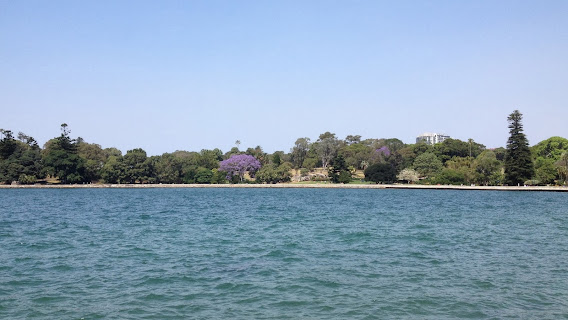 In the UK, Freddos represent a very cost-effective source of sensibly portioned Cadbury’s chocolate. At 20p for 20g, they have a weight/cost ratio that is not seen again until the dangerously big 100g+ bars. 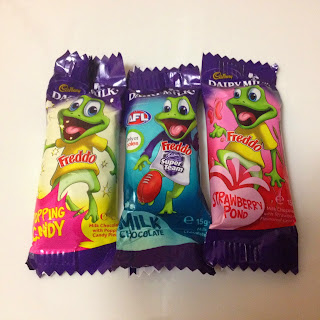 In Australia, basic Freddos are not quite so good - they’re not so cheap for one thing but, more importantly, unadulterated Cadbury’s chocolate is nowhere near as nice. Perhaps for this reason, Cadbury’s in Australia adulterate their Freddos with additional flavours a lot more than the UK (where I’ve only see Caramel). Two such examples are “popping candy” and “strawberry pond”. Whilst the former is just odd, the latter is actually very nice - a bit like a giant Strawberry Cream from Quality Street.

When is a Moro not a Boost? When it's an Aussie Cadbury's Mars Bar! 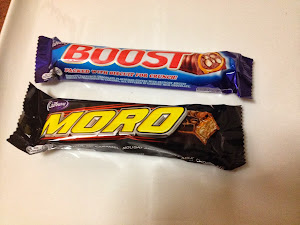 One of the pleasures of moving to a new country is getting to grips with it's idiosyncracies, especially when the familiar gets a touch of the unfamiliar. This is particularly true of foodstuffs, I think. One such example is the Cadbury's Boost and Cadbury's Moro.

When I first moved to Ireland, the chocolate bar in the UK known as a Boost (formerly a Biscuit Boost, I believe - the original being coconut -) was called a Moro. The exception, I think, was the Boost Guarana, which contained Guarana - whatever that is. I was therefore pretty conditioned to the fact that a Boost and Moro were the same thing.

In Australia, they are not the same at all! A Boost is like a Boost in the UK. (The texture might be a bit different but that might also just be the heat.) A Moro, on the other hand, is more like a Mars bar, with nougat and caramel. The texture is a little different and it's nicer than a Mars bar, I think.

Cadbury's chocolate itself is rather disappointing compared to its British or Irish namesake - more like Rowntree's chocolate. (It reminded me of non-Cadbury's Easter Eggs.) In bar form, however, with other non-chocolate components, it is nice.

So there you go. Next up (for Cadbury's): Freddos.

Setting up an Australian bank account as an immigrant

One of the first things that you need to do following any international move is to set up a bank account. This was actually surprisingly easy and pleasurable to do - and a lot less troublesome than in Ireland or the UK.

My wife and I have both had previous experiences (as a Brit moving to Ireland and vice versa) of getting stuck in the home address/bank account feedback loop of madness, i.e. you need an address to open a bank account and you need a bank account to get somewhere to live. Happily, the Aussies are a bit more pragmatic/sensible in their fight against fraud and one can open an account with just a passport within a certain period of arriving in the country. This alone has made the past week a lot less stressful.

On the advice of a friend, we opted for an account with NAB (National Australian Bank), which is fee-free and comes with decent internet banking, if my experience so far is anything to go by. The pain-free setup was made even more relaxing by the friendly bank staff and the fact that they were playing a pretty awesome set of 20th Century power ballads in the branch. They were even able to order us debit cards straight away - something else that Nationwide in the UK would not do for six months! I think getting a credit card will be equally painless - we just need to wait for a couple of payslips.

With a bank account sorted - and therefore a means to transfer some of our UK funds - the rest of the immigration process feels a lot less daunting.

Posted by Richard Edwards at 22:00 No comments:

Economy comfort from London to Sydney in a Qantas A380

We’ve been in Sydney a few days now* and things are beginning to calm down enough to consider a bit of blogging. A lot’s been happening since my last proper posting period and I was not sure where to start but the trip over seemed like a good place to start. [*At time of writing.]

I’ve made a fair few long haul flights over the past couple of years and although this was one of the longest it was also one of the most comfortable - even though we were just in standard economy class. Things did not start out too well, it must be said. Despite checking in literally the minute that online check-in opened - I was there hitting “refresh” until it would let me - we had a choice of 3 seats, only two of which were next to each other. I generally like a pair in the centre block of four, so there is no need to disturb (or be disturbed by) a stranger when exiting the seat. Instead we ended up with a window and middle seat in one of the outer three seats with me in the middle.

Lesson 1. Pay the extra $25 to pick seats as soon as the booking is made! For a long haul flight of that price, it is not much extra to pay - and apparently everyone else does it, if seat availability was anything to go by!

On a 747, this might have been an issue. Happily, we were travelling on an Airbus A380, which have three things going for them in the comfort stakes:

1. New. I think it’s fair to say that new planes are always more comfy than old ones - the seats are new and comfortable, the plane is quiet and the entertainment system is better. The A380 ticks all three boxes.

2. Big. These guys are big. Really big! As a result, the inside is really rather roomy, even - on Qantas planes, at least - in economy. Although I spent 13 hours with a person each side of me, often with the chair in front reclined, I never felt particularly cramped or claustrophobic. The cabin ceiling is also high, which adds to the sense of space, and the overhead lockers for hand luggage are roomy and accommodating.

3. Well-designed. In addition to being shiny and massive, there were some little touches that added to the space and comfort. For example, the seat base slid slightly forward when the back reclined, which gave the person behind a little more knee space. They are also surprisingly quiet on the inside for a 600 ton lump of metal being jet propelled at 30,000 feet. I did use my noise-cancelling headphones but they were not a necessary as for most planes.

As a result, despite a very good selection of movies that I had not seen and a usual inability to sleep on planes, I managed to get a fair few hours, especially on the long Dubai to Sydney leg.

Lesson 2. Always book on an A380 where possible, even if the times are less convenient. I would rather have a couple of extra hours on the plane we flew over on than have a shorter trip on the BA 747 that I flew back to the UK on in February. (Happily, the Qantas route via Dubai is also the shortest!)

The only real negative on the flight over was that we were given some dodgy advice in Heathrow regarding Duty Free. Having scoped out our chosen whisky to bring over (Dalmore Valour), we were advised that this would not be possible as we were travelling through Dubai. Nonsense. Although you have to go back through security, they just take your duty free off you at Dubai and put it in the hold to collect later.

Lesson 3. You can buy duty free, even when travelling via Dubai.

And therein ends the lesson(s).

Number 10, Southampton - Self Catering accommodation at its best!

Having a few minutes to kill at the airport, I thought it was fitting (and easy!) to leave a quick blog post about the last place we stayed in Southampton (having sold the house back in September): Number 10 on Landguard Road, Southampton. It’s run by the same people who run the excellent Mayfair Guest House across the road (#1 in Southampton on Tripadvisor!), where we also stayed a couple of nights.

Time is short, and I am lazy, so here is my Trip Advisor review:

We feel lucky to have found Number 10. We stayed here for our last two weeks in Southampton prior to moving abroad and it was exactly what we needed.

We stayed in one of the “standard rooms” with a shared bathroom. The room was big and well presented, as in the website photos. There are two standard rooms sharing two bathrooms, so we never had to wait to use the facilities. The bathrooms themselves are kept very clean and the showers are superb! Other shared facilities are great. The kitchen is well-equipped and each room has its own locked cupboard. Laundry facilities etc. are also good and seem sufficient for the number of guests.

The owners of Number 10 (who run the Mayfair Guesthouse B&B over the road) are extremely friendly and helpful; they made us very welcome and looked after us well but never felt intrusive.

The accommodation is very well situated, close to the train station and the city centre. It’s also a great price for what you get - a lot cheaper than a serviced apartment, for example. All things considered, Number 10 is ideal for someone moving to/from Southampton or visiting for a couple of weeks.

For anyone from the University of Southampton (and Solent, for that matter,) I reckon this place would be great for visiting academics or arriving postdocs etc.

Contributions to the blogosphere have been a bit lacking of late due to selling our house and general preparations for moving 17,000km to the other side of the world. (And the untimely demise of my MacBook's hard drive.) Only ten days to go! Rest assured that there are a host of half-written posts, at least some of which should see light of day soon! Who knows, Mystic Mog and the Exploding Tortoise might even get a reboot!

Posted by Richard Edwards at 08:30 No comments: