I'm something of a closet Royalist. I don't mean that I harbour suspicions regarding the sexual orientation of certain princes - it's none of my business - but rather that I have certain sympathy for the Windsors and think that, all things considered, they do a pretty good job. Until the Olympics came along, the recent Royal events (wedding and jubilee) are the closest we Brits have really got to having a proper national event.

There is also a small part of me that wonders whether we wouldn't be better off reinstating a Monarchy - if we could get rid of the "Divine Rights" aspect, at least. (A secular hereditary oligarchy, maybe?) Anyhoo... I'll save that one for another day.

With the Paralympics looming, this post is meant to be about the Olympics... and another one of the highlights for me was the British Royal family. (Partly, I suspect, because they kept the more embarrassing ones hidden from view!)

First, there was that moment during the Opening Ceremony when everyone turned to their neighbour and said "that's not her is it?" - or something similar. But it was the actual Queen! Sky-diving with James Bond! OK, so not actually sky-diving - and there was a bit of a daylight continuity issue - but, even so, respect to QEII for getting involved and not taking herself too seriously. Along with the torch, I think it was my favourite bit of the ceremony. 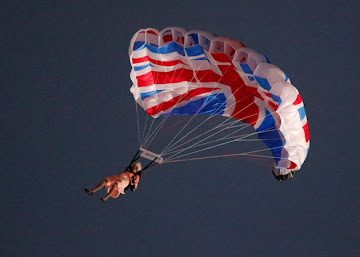 As well as the Queen, I was also very impressed with the Princes - particularly Harry. They appeared on the BBC and just seemed like very sensible, well-adjusted, human fellas. I know that Harry has had a bit of a rough time in the press lately - again, none of my business - but I'd be pretty happy to have him or his brother as King. They both seem to have their heads screwed on the right way - which is quite a wonder, all things considered.

I really liked the fact that he was the official Royal representative for the closing ceremony. What's more, having seen Harry's Arctic Heroes, I am also glad to hear that it will be "business as usual" for him at the Paralympics.
Posted by Richard Edwards at 03:03