Game of Drones: decline of a masterpiece

If, like me, you are a fan of the TV series "Game of Thrones" and if, like me, it made you want to rush out and buy the book, I have two things to say:

1. It is a fantastic book and one of the best I have read for some time. It is full of interesting characters, plot twists, and intrigue. It is really well written and hard to put down.

I finally made it to the end of "A Dance with Dragons" a couple of weeks ago and it was great. Great to finally make it to the end, that is. It's just getting so boring. 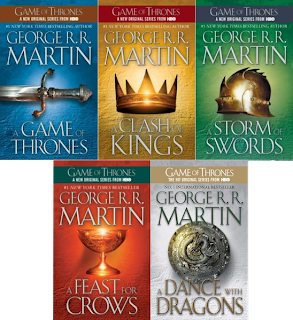 Like I said, the first book is fantastic. The second book is good two. Characters develop. Plot lines are established. Interesting possibilities are set up. It's all looking good.

Then, it all starts to go a bit wrong and I am not really sure why. I can't quite work out whether George R. R. Martin buys into the "Epic" business a bit too much, sees the success of the series as a license to print money, or just loses control of the characters.

Either way, the books get longer and longer, the plot more and more convoluted, and I find myself caring less and less about the characters. Worse, more and more of the characters that I do care about either get killed off or sidelined and forgotten about or have all of their endeavours and previous plot twists ultimately lead to nought. Ironically, it actually reminds me of an American TV series - it starts well enough to get you invested and sucked it but then gets progressively more and more pedestrian as they try and find ways to string it out long enough to reach syndication.

I still hold out some hope that (a) Martin know where the series is going, and (b) it's not all going to be some big Matrix-style let down once we get the answers, but the last couple of books do not fill me with hope. Coming full circle, what hope I have actually lies with the TV series. This has already taken a few short-cuts to avoid some of the complexity and I cannot believe that a TV audience will have the patience for all the subplots that ultimately go nowhere and unnecessary back stories for minor characters that appear in the books.

I think Martin would have benefited from learning from (still) the master of the genre, Tolkien. A complex world full of myths, legends and history is a great thing but you do not need to visit it all in the same set of books. The Lord of the Rings works so well because we follow the fates of a handful of key characters against a vast backdrop - we don't also follow the individual stories of all the important characters that appear as part of that backdrop.

A Song of Fire and Ice does have some clear heroes and villains but there is such a disproportionately small amount of the text devoted to them, it's easy to forget. Flawed heroes are all well and good but you don't want so many flawed heroes, neutrals, and bad guys with redeeming features that it's no longer clear who you should be rooting for. Perhaps, the idea is to let you choose who you want to support but, for me, that's like reading history, not fantasy.

So, if you want to read some good fantasy, read Lord of the Rings. If you want to read A Song of Fire and Ice, my advice would be to wait until the last couple of books are written and we know whether the massive investment of time is actually worth it. There are still a few directions that I could see it might go in that would end on a high. In the meantime, you can just watch the TV series!
Posted by Richard Edwards at 02:37