If there is one slight reservation that I have going into tonight's Opening Ceremony (beyond the possibility of Boris Johnson representing Britain again), it's the fact that Paralympic TV coverage has gone to Channel 4. The BBC did such a good job that it's going to be hard to follow.

It's not just the fact that the coverage itself was awesome, although it was: at various points I was watching events on my iPhone or (on occasion) my computer at work as well as the 3 normal BBC channels and 24 x 24hour HD channels that were broadcasting sports of various kinds. I also warmed to many of the presenters and pundits. (Some annoyed me, it is true, but this is a highlights post!)

For some people, I suspect that Gary Lineker was an odd choice for one of the anchors but I actually thought it was very appropriate in the spirit of sportsmanship and fair play. Here is a man who, despite playing at the very highest level in three countries, maintaining a games:goals ratio of less than 2 at club and country, winning the 1986 World Cup Golden Boot (despite being cheated out of a semi-final place by that goal from Diego Maradona), winning the English Golden Boot three times (for three different clubs) and being the second-highest goalscorer for England of all time, never picked up a yellow or red card. He has his critics (who doesn't) but I thought he did a fine job and even followed him on Twitter for the duration of the Games. (He clearly got a genuine kick out of meeting the athletes and being there to see their achievements. I've stopped following now because it's all back to football and my Twitter feed is full enough already!)

Other notables for me were former jockey Claire Balding, who did a great job for all the equestrian events, John Amaechi covering the basketball, and Ian Thorpe given punditry for the swimming and general Aussie opinion. (In the true "Inspire a Generation" spirit, Ian Thorpe even managed to fit in an impromptu swimming lesson at Tooting Bec Lido before heading back Down Under.) Then, of course, there was Sir Steve Redgrave: Olympic legend and all-round top chap. 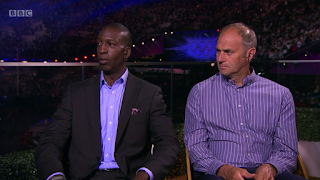 The stars of the show (athletes aside!) for me, though, were the Athletics team and, in particular, Michael Johnson. Not only was he the perfect straight-faced foil for the unabashed partisan British exuberance of Denise Lewis (also great) and Colin Jackson but he also seemed to know a lot about the sport. This was a man who had clearly done his homework but not so that he could come out with ridiculously irrelevant statistics like too many commentators; his comments were always informative and interesting.

One situation that particularly stood out for me was the short piece they did on the proverbial question of why black athletes dominate track events. I'm not going to go into the arguments about this here, other than to say that (a) there is a really nice post at Further Thoughts for the Day about this issue and (b) Michael Johnson also presented most the arguments covered in that post. I was impressed, anyway.

Fingers crossed that as the BBC pass on the torch of coverage to Channel 4, the latter are able to match the former's quality of coverage, even if the quantity of coverage escapes them.
Posted by Richard Edwards at 23:01