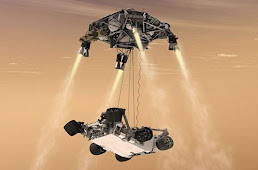 This is science that is way cooler than science fiction because it is (hopefully) really going to happen. I really hope it works. It'll be a nervous day in the NASA control room. As they point out in the video, the distance between Earth and Mars is such that when they first receive word that Curiosity has entered the Martian atmosphere, the rover will already have been on the surface - in one state or another - for seven minutes! Space is big - even our little corner of it.

I'd been hoping to embed the video here but it doesn't seem to be working. To be honest, though, you're better off going to the NASA website as there is plenty of other great Curiosity stuff to explore. (You can find out more about the Curiosity Rover in another NASA video, "The Science of Curiosity: Seeking Signs of Past Mars Habitability", for example.)
Posted by Richard Edwards at 02:39