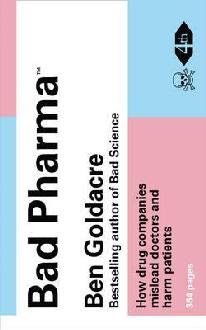 Ben Goldacre is well known for busting Bad Science and promoting evidence-based medicine. His latest book, Bad Pharma, goes beyond quackery and takes on Big Pharma, highlighting what are down-right dangerous practices in the industry. I haven't read the book but his recent article about it in the Business section of the Guardian, "The drugs don't work: a modern medical scandal", makes scary reading. You can also hear him talk about it in a recent Nature Podcast Extra.

It's common knowledge that Homeopathy is pure placebo and literally has no active ingredients. The danger of homeopathy is not that it will do you any harm - there is nothing in there to do any harm - but rather that people will be conned into using Homeopathy in place of treatments that could actually cure them. (Not all conditions can be treated effectively with a placebo and some drugs out there genuinely do work better than placebo.)

The same is not true of drugs. (Or herbal remedies for that matter.) They contain an active ingredient and therefore there is the very real potential for harm as well as the very real potential for an actual positive effect. It is therefore much worse to find out that Big Pharma companies are playing games with the clinical trials and evidence on which doctors base their treatments.

Big Pharma, Homeopaths and woo merchants are all in the business of making money and so it is perhaps not surprising that they use some of the same tricks to sell their wares but what is surprising (to me) is the extent to which the law lets them get away with it and regulating authorities are apparently powerless to do anything about it. Although it does nothing to undermine the need for evidence-based medicine, it massively undermines the access to evidence-based medicine - if the evidence the doctors get access to is hidden or distorted then what's the point?

"Medicine is broken. And I genuinely believe that if patients and the public ever fully understand what has been done to them - what doctors, academics and regulators have permitted - they will be angry... I'm going to tell you how medicine works, just over the page, in one paragraph that will seem so absurd, so ludicrously appalling, that when you read it, you'll probably assume I'm exaggerating."

Before I get to that paragraph, I would say that there is at least one other group that will be (and are!) angry - other academics. I am one! I am angry as both a sometimes patient and a scientist. (And, when it comes to medicine, a member of the public!)

The reason this angers me as a scientist are two-fold. First, the trivially obvious reason: such flagrant abuses of methods that are supposed to provide objective evidence not only undermine public faith in medicine but they undermine faith in science as a whole. (Not, sadly, that non-medical science is immune to these abuses but they generally seem to get identified by other scientists, who are all skeptics by nature, and rarely have the same capacity for harm.) The second reason is that it is not just doctors and patients that use these data. There is a lot of effort being put into mining existing drug actions and side effects to identify novel treatments (e.g. "network medicine") - often by people who do not stand to make money from the discovery. The weakness with all of these approaches is that "rubbish in, rubbish out" and if the pharma industry is systematically sabotaging the data that the scientific community are using for such endeavours then a lot of good scientists are wasting valuable time and money, not to mention missing important connections that could result in genuine treatments.

But now for that paragraph. You can read the full paragraph using Amazon's Look Inside feature but here's a taster:

"Drugs are tested by the people who manufacture them, in poorly designed trials, on hopelessly small numbers of weird, unrepresentative patients, and analysed using techniques which are flawed by design, in such a way that they exaggerate the benefits of treatments. Unsurprisingly, these trials tend to produce results that favour the manufacturer. When trials throw up results that companies don't like, they perfectly entitled [legally, not morally - RJE] to hide them from doctors and patients, so we only ever see a distorted picture of any drug's true effects. Regulators see most of the trial data, but only from early on is a drug's like, and even then they don't give this data to doctors or patients, or even to other parts of government. This distorted evidence is then communicated in a distorted fashion..."

The rest of the paragraph - and, judging by the intro, the book - is not much cheerier. It's no wonder he says that Medicine is broken. When I am feeling brave, I think I will order a copy for my kindle.

Nevertheless, I think there is something worth pointing out or reiterating: this is a problem of implementation, not theory. It is not that drugs cannot or do not work - some do and we have well-designed and well-executed studies that show this. (Generally, the older ones, when Pharma was not so desperate or, perhaps, cynical and there was more low-hanging fruit.) It is not that medicine should not be evidence-based or that we do not have methods for gaining that evidence. This does most emphatically not mean that homeopaths and woomeisters were right all along. The fact that some of their conspiracy theories have a semblance or truth about them does not mean that their pseudoscientific nonsense suddenly gains merit.

I'm not really sure what can be done about this but the first step on the road to recovery is admitting that you are sick, and it certainly cannot be swept under the carpet. Part of me still hopes that Ben Goldacre's new book is an exaggeration (or, at least, concentrates on all the negatives) but can we really take that chance? However widespread the problem in terms of current drugs that are affected, we must make some changes to things that are clearly broken. Making the clinical trials process entirely independent of drug companies would be a start and forcing drug companies to publish all of their data from trials for analysis by independent experts seems like such a no-brainer that my mind still boggles a little at the revelation that it isn't so.

Should it be needed, it's just another indicator of the dangers of privatising health care. When the bottom line is money not effectiveness, you know you are in trouble.
Posted by Richard Edwards at 07:48