It’s official - I have become an Apple fanboy. Despite my irritation at their policy of charging seemingly excessive amounts for cable/adaptors to connect their devices to the rest of the world - I nearly wrote “unashamed fanboy” but I am slightly ashamed - they keep finding new ways to blow my mind. (And make me feel old at the level of excitement and amazement it stirs in me.) 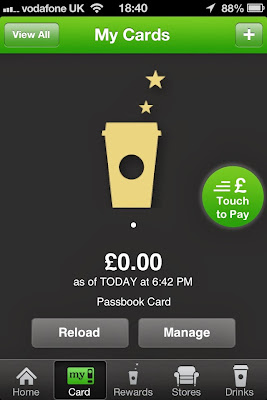 Shopping on a mobile device is pretty old school and Apps for online stores abound. What got me really excited recently, though, was the ability to shop in the real world using my phone. The first step on my journey was at Starbucks. I’ve had a Starbucks card and the Starbucks App for some time and finally took the plunge a couple of weeks ago to try and pay with the App - simply tap Touch to Pay and a barcode pops up that can be scanned at the till (if you have credit on your card). No messing about with cash and wallets - indeed, no need to carry my Starbucks card in said wallet. (Not sure why I still do!)

Today, however, I experienced something beyond that, which really took things to the next level. At the iPad training day on Tuesday, the instructor had an Incase Origami Workstation, which I rather liked the look of. (I have posted before that “When it comes to writing, it’s more of an oPad than an iPad” and this could be a solution - a future post will report!)

A quick browse found it cheaper in the online Apple store that at Amazon, so I thought I’d pay the physical Apple Store in West Quay a visit and see if they had it too. They did, so I grabbed one. I wanted to ask about the pros and cons of having an iMac versus Mac mini plus external monitor, so I loitered and ogled/coveted all the beautiful things in the shop for a while. Unfortunately, all the iStaff were busy, so I gave up and brought my potential purpose up to the desk to pay.

Big mistake, really showing my ignorance, that one! You don’t pay for stuff at the desk in an Apple store - it’s just for repairs, as I was informed. I could take it to any of the roaming staff instead. I actually felt a bit annoyed at this and my face might have fallen at that point, for I had been waiting for one of the roamers to become available for a while. But then: 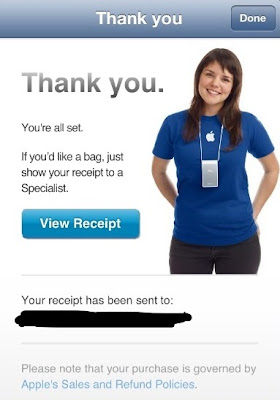 “Or… you could just do it yourself on your iPhone…”

But yes, it’s true. For fellow ignorami in the futuristic ways of the Apple store: you can buy things in the shop by using the Apple Store App on your phone. No need to even speak to any of the staff unless you want a bag. You just log on to the store WiFi, go to Stores in the App and pick EasyPay, then scan the barcode of your purchase. Confirm with your Apple ID password and you’re away! Your receipt appears on your phone (and gets emailed to you) and the staff get a notification of the purchase, whilst you go on your merry way. Modern technology! Mind blown.

Posted by Richard Edwards at 08:24