The Ehux genome is here and it looks epic!

In addition to my main research on Short Linear Motifs, I have a number of collaborations with environmental scientists looking at how various organisms, such as corals, might be affected by rising CO2 levels. 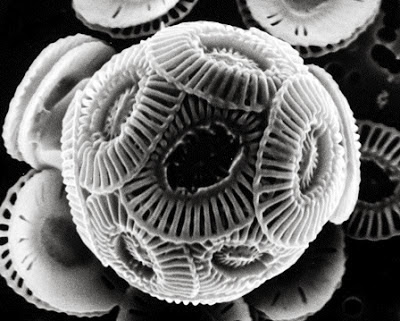 One of the more fun collaborations has been with Bethan Jones (now at Oregon State University) and Debora Iglesias-rodriguez (now at UC Santa Barbara), working on the marine phytoplankton Emiliania huxleyi. Along with Paul Skipp at Southampton, I was involved with with proteomic analysis of this small but important organism. This was challenging because, at the time, their was no annotated genome available - hence the need for some bioinformatics help. (The second paper from this came out in April but my planned blog post was postponed after the Boston marathon bombing and is now sitting on my To Do list.)

Happily, the genome is now out! As reported in the KQED blog post, Opening the Gene Box of a Key Ocean Species:

“This week in the journal Nature, a worldwide team of 75 scientists revealed the genetic blueprint of the one-celled alga Emiliania huxleyi, which may be the most important species you’ve never heard of. The genomes of the domestic dog and cat are interesting, but the E. huxleyi genome is a much bigger story. Some day this organism may become another of our partner species, as vital to us as yeast.”

Even more happily, Bethan and Debora are both authors on the paper (as part of the Emiliania huxleyi Annotation Consortium), Pan genome of the phytoplankton Emiliania underpins its global distribution, which reports “sequences from 13 additional isolates” in addition to the genome of the reference strain CCMP1516. Many years in the making, it’s a bit of an epic, and I look forward to learning some more of Ehux’s secrets.

Posted by Richard Edwards at 08:36