Coral research at Southampton gets a well-deserved boost 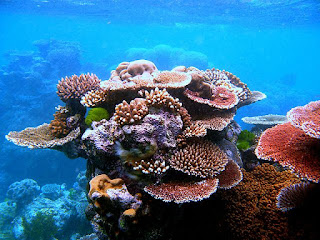 It's always nice to bask in the reflected glory of a collaborator. EU grants are hard to get and funding is getting ever tighter due to the global economic situation, so it was great to read of a local success as reported this week in a University of Soutampton press release. The congratulations go to Joerg Wiedenmann, who heads up The Coral Reef Laboratory here in Southampton.

Joerg does lots of interesting work on corals, looking at how they adapt to (or suffer at the hands of) Climate Change, including work on coral bleaching. I've done a little work with him on coral red fluorescent proteins, which are related to the famous Green Fluorescent Protein (GFP). (The massive diversity of fluorescent protein mutants that now exist are a great example of how single amino acid mutations can have quite dramatic phenotypic effects that would certainly be "visible" to Natural Selection.) It's not published yet, though, and it's very much his project, so I won't write about it now. 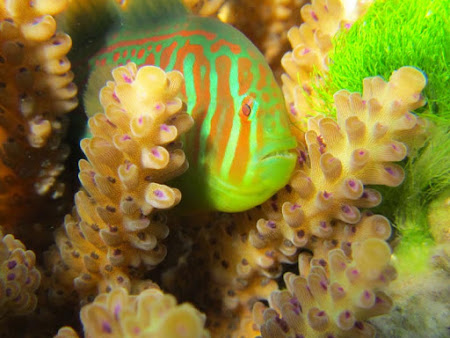 Corals have also been in the Science news a lot recently following the recent discovery that they recruit gobies to act as "body guards" and clean off toxic seaweed that would otherwise threaten the coral's survival. Pretty cool!

Corals are generally fascinating animals even when they're not recruiting fish body guards. For one thing, they have symbiotic algae, which photosynthesise and can make up a substantial proportion of the material in each polyp. Indeed, it is expelling these algae under stress conditions that leads to the bleaching that Joerg studies. As an evolutionary biologist studying molecular responses to stress, however, this symbiosis can be frustrating as well as fascinating: corals could acclimate through their own regulatory changes or adapt through evolutionary changes, or these changes could happen in the algae, or by swapping algae. Enough options to keep researchers busy for some time!
Posted by Richard Edwards at 07:09