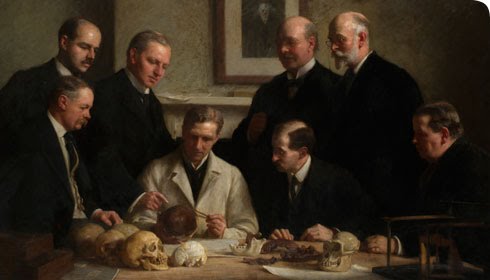 A century ago today, "Piltdown Man" and associated finds were announced at a Geological Society meeting. It subsequently turned out to be one of the biggest scientific hoaxes of all time, though it was not discovered for over 40 years and we still don't know who did it, or why. (Although there are suspects.) I'm not going to recap the details here because the Natural History Museum and recent Nature Podcast Extra do a much better job than I can. (And WEIT!)

It's a good reminder to all of us in science, however, not to get too carried away with novel discoveries until they have been thoroughly verified. It seems pretty clear that a number of the scientists involved in Piltdown were thoroughly duped and tragically so in some cases. I think it is sometimes easy to forget that not everyone has the level of scientific or personal integrity that we hope all scientists aspire too.

It is also a good reminder of something else, though, which is encouraging in this modern age of Bad Pharma, continuing misrepresentations of evolution and relevations of scientific fraud: with science, the truth will generally out in the end. Piltdown Man was a hoax but human evolution is real and it was predominantly further finds and evidence that cast aspersions on Piltdown's authenticity until new technologies finally revealed it as an unequivocal fraud. What's more, despite its importance in the past, this was not hushed up or swept under the carpet. In the modern age, with its pressures for instant press releases and hurried high impact publications, I take great comfort in that.

Despite some claims to the contrary, there is no giant scientific conspiracy for, in the long run, as scientists we have nothing to gain.
Posted by Richard Edwards at 06:44