I am in the throes of marking at present and one mysterious error is cropping up enough to warrant a short blog post: the confusion of the terms "outgroup" and "outlier" when discussing phylogenetic trees. The source seems to be a familiarity (or exposure) to the term "outlier" in statistics, combined with a lack of familarity/awareness of the term "outgroup". So, what is an outgroup? 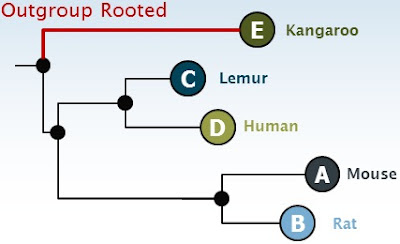 An outgroup in phylogenetics simply refers to a lineage that is known to be more distantly related to the other species (or DNA/proteins) being studied. In the example shown, the kangaroo is a known outgroup to the other mammals, as marsupials diverged from the common ancestor of placental mammals prior to the subsequent radiation of placental mammals. This knowledge can be used to "root" the tree, as in this example, but more on that in a later post.

What about outliers? "Phylogenetic outliers" are sometimes referred to but, as far as I am aware, there is no standard definition. Instead, it is a term that is used when some form of numerical test (such as evolutionary rates) or statistics have been applied to a phylogenetic tree and there are particular branches that do not fit the norm - they are "outliers". In this tree, the kangaroo is not noticeably an outlier, although it's evolutionary rate depends on a somewhat arbitrary position of the root on the kangaroo branch. The rodents might be outliers (if there were more data) as they tend to evolve quite quickly due to short generation times. In this particular tree, I doubt it though. (This tree is made up, by the way.)

Most important, though, "outlier" is not a synonym for "outgroup" and should be used with great caution.
Posted by Richard Edwards at 06:36