Leek risotto with chestnuts - it may not be healthier than a ready meal but it sure is tastier!

Yesterday, we had "Leek risotto with chestnuts" from Hugh Fearnley-Whittingstall's River Cottage Veg Every Day! The picture (below) does not do it justice, more to do with my bad/rushed food photography skills than the dish itself. I've never used chestnuts in a recipe before and they were tasty! Easy too. 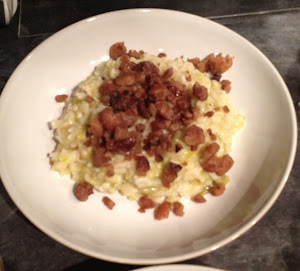 Leek risotto is a bit of a deviation from the normal risotto I make, which has shallots or onions as the first ingredient and then something for the flavour later. The leeks take the place of both elements but they require some additional cooking up front. 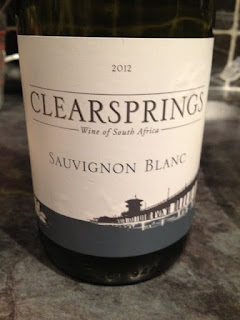 Once they've been sauteed in butter for 20 mins or so to make them really silky, though, it's pretty much business as usual: chuck in the risotto rice and fry for a bit with the leeks, cook off a glass of dry white wine, then simmer in stock, adding a bit at a time. The chestnuts were simply crumbled, cooked in a bit more butter for a couple of minutes, and then added at the end. Delicious!

It paired very well with the dry white I used for the risotto too, a Clearsprings Sauvignon Blanc from South Africa. (Half price in Sainsbury's at the moment!)

Celebrity chefs have got some bad press recently following a report on some research on the BBC News website - Ready meals 'healthier' than TV chefs' fare:

"In the study, published in the British Medical Journal, they compared 100 main meals from four TV chefs, who had books at the top of the bestseller charts, to 100 supermarket ready meals. These were then compared to nutritional guidelines set by the World Health Organization.

And then the damning traffic lights themselves:

There was a fair amount of butter in this recipe, it is true, but I think this account might be a little harsh on the old celeb chef cook books, even ignoring the very valid comment by the chefs themselves that they feature of mix of "normal" and "special occasion" dishes. There is also a lot more to healthy eating than the "traffic light" system. What about the nutritional value of the food?

It is true that the risotto only had three leeks in four portions but the ratatouille we made at the weekend from the same book was packed full of vegetables. Similarly, Jamie Oliver's English Onion soup recipe from Jamie at Home may have been topped with cheese on toast but was crammed full of onions and leeks.

Not only are these recipes packed full of veg, they're packed through of flavour too! Which brings me to my last point: cooking fresh food and making something tastier than any ready meal has to be better even if it gets the odd red light. Cooking tasty recipes increases confidence and leads to cooking with more fresh fruit and veg. Finally, if there is unhealthy stuff in there, you know because you put it in!
Posted by Richard Edwards at 05:22