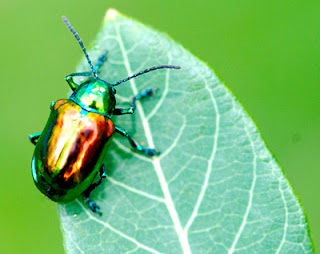 In a recent perusal of The Blogosphere, my eye was caught by a post at A Tippling Philosopher entitled Far from random, evolution follows a predictable genetic pattern, Princeton researchers find. As I suspect most evolutionary biologists would, I got rather annoyed by this title. I should point out, however, that the Tippling Philosopher is not to blame - this is the title of the original Princeton press release.

Unfortunately, my VPN is playing up so I cannot access the original article (Zhen Y, Aardema ML, Medina EM, Schumer M & Andolfatto P (2012). Parallel molecular evolution in an herbivore community. Science 37(6102):1634-7) but I am a bit short of time anyway and don't want to do an in depth study. I suspect the press release actually does a fairly good job of summarising the main points as does the abstract:

Numerous insects have independently evolved the ability to feed on plants that produce toxic secondary compounds called cardenolides and can sequester these compounds for use in their defense. We surveyed the protein target for cardenolides, the alpha subunit of the sodium pump, Na+,K+-ATPase (ATPα), in 14 species that feed on cardenolide-producing plants and 15 outgroups spanning three insect orders. Despite the large number of potential targets for modulating cardenolide sensitivity, amino acid substitutions associated with host-plant specialization are highly clustered, with many parallel substitutions. Additionally, we document four independent duplications of ATPα with convergent tissue-specific expression patterns. We find that unique substitutions are disproportionately associated with recent duplications relative to parallel substitutions. Together, these findings support the hypothesis that adaptation tends to take evolutionary paths that minimize negative pleiotropy.

This is all very interesting and very cool - the power of evolution by Natural Selection demonstrated in replicate. The thing that irked me, though - and the focus of this (probably too hasty) post - is the title and the first paragraph of the Princeton press release:

Evolution, often perceived as a series of random changes, might in fact be driven by a simple and repeated genetic solution to an environmental pressure that a broad range of species happen to share, according to new research.

Evolution is not a series of random changes. At least, adaptive evolution, which is the subject of this paper, is not. Neutral evolution largely is random but that's only one part of evolution as a whole and to imply otherwise is rather misleading. The raw material for evolution is indeed random mutation but this is not the full picture. There was a clever chap who realised that heritable random variation in a trait, if it produced differential survival and/or reproduction, could result in the non-random change of that trait. Good ("fit") traits would increase in frequency and eventually dominate the population, while bad traits would be removed. He realised this over 150 years ago and called it Natural Selection. His name was Charles Darwin and his book is free on Kindle if you want to read it. (Yes, I know, this is a gross simplification of history!)

This is compounded by the title: "Far from being random, evolution follows a predictable genetic pattern, Princeton researchers find". Well, yes, sometimes it does (and in this case) but we've also known that for years. The argument about the predictability of evolution is one that has been going on for a long time. (Read Gould's "A Wonderful Life", for example.) If you were to rewind the clock and let evolution run again, how much would history repeat itself? We know the answer is not "always" and we know the answer is not "never" but we do not know where on the continuum between "always" and "never" reality lies. (Major catastrophic events notwithstanding. These are another role of chance but somewhat different to the one determining evolutionary trajectory.)

In evolution, the opposite of "predictable" is not completely "random". One has to be clear that even if we cannot predict a precise evolutionary trajectory due to the complexity (and, yes, randomness) in the system, trajectories that give rise to exquisite adaptations always have a large non-random component (selection). This may seem like a trivial thing but it's not, for this is the kind of language that feeds the misconceptions spread my advocates of Intelligent Design and other forms of Creationism. (Of course, this study also nicely blows such nonsense out of the water.) If it is "often perceived as a series of random changes", it is only because of misconceptions like this being repeated.

For me, it is the last line of the abstract that is most intriguing and possibly the big discovery:

"Together, these findings support the hypothesis that adaptation tends to take evolutionary paths that minimize negative pleiotropy."

The authors cite "the large number of potential targets for modulating cardenolide sensitivity". It seems that they think that the other possible target genes are more prone to affect other systems as well in a bad way. (I am not sure how they rule out the possibility that the selective advantage of changes in this particular pump are just much, much greater than the other genes and its just driven by the probability and rates of positive selection.) If this turns out to be a widespread phenomenon, it could indeed have implications for the predictability of future adaptation, which could be useful in our changing world!

This is just one example, of course. Another recent paper on parallel and convergent evolution in Proc. R. Soc. B (free this time), "The probability of genetic parallelism and convergence in natural populations" by Gina Conte, Matthew Arnegard, Catherine Peichel and Dolph Schluter, looked at a bunch of studies and concluded that "estimates [of the probability of gene reuse in parallel and convergent phenotypic evolution in nature] using data from published studies. The estimates are surprisingly high, with mean probabilities of 0.32 for genetic mapping studies and 0.55 for candidate gene studies".

I'm sure there's a bit of ascertainment bias towards traits under strong selection (as these are more obvious and thus more studied) but it confirms the Andolfatto study that in the right circumstances convergent evolution can make use of the same gene(s). (They also cite counter-examples, so be quite clear that this is not universal.) It's not a surprise that it happens but given the amount of diversity between genomes - and numbers of genes affecting many traits - the level is possibly surprising. To be honest, I can't decide if I am surprised or not as it is so hard to generate a reasonable a priori expectation.

I still don't think that all this means that evolution in general is predictable (we still need more studies) but it certainly does hammer yet another nail in the coffin of the old Creationist chestnut about evolution being random. Natural Selection is NOT random - that's the whole point!

Footnote: I must concede that in writing this post I realised that explaining the role (and meaning) of "random" in the context of evolution is not quite as simple as I thought. "Random" commonly does mean a lack of predictability but I maintain that it is not helpful to use this language for evolution without some serious explanation of what you mean by random. Random mutation plus Selection means that we are talking about a lack of determinism, not a lack of direction. (This was also supposed to be a quick/short post!)

h/t: A Tippling Philosopher and WEIT
Posted by Richard Edwards at 09:57