Singing (but not stridulating) cicadas

When we arrived in Sydney it was the awesome purple Jacaranda trees and screechy fruit bats that gave us daily reminders that we were in a new a foreign land. At this time of year, it’s the cicadas. As reported in a Daily Telegraph article, Cicadas having a blast this year, it is a particularly noisy year for these insect tree huggers.

“The male cicada has loud noisemakers called “tymbals” on the sides of the abdominal base. Its “singing” is not the stridulation (where one structure is rubbed against another) that characterizes many other familiar sound-producing insects, such as crickets. Rather, the tymbals are regions of the exoskeleton that form a complex membrane with thin, membranous portions and thickened ribs; contracting the internal tymbal muscles produces a clicking sound as the tymbals buckle inwards, and the relaxing of the muscles causes the tymbals to return to their original position, producing another click. The interior of the male abdomen is mostly hollow, which amplifies the sound. A cicada rapidly vibrates these membranes, and enlarged chambers derived from the tracheae make its body serve as a resonance chamber, further amplifying the sound. The cicada modulates the sound by positioning its abdomen toward or away from the substrate.” 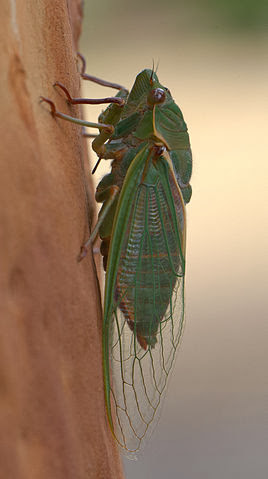 These things are crazily loud! On recent drives down the coast and to the Hunter Valley we would be driving along and hear this noise building, as if we were approaching a hissing downpour of rain through the trees. It was, in fact, pockets of cicadas, “singing” so loudly that even at 100 km/h it sounded loud as we passed. (Louder than “an industrial jackhammer, a chainsaw or even a dreaded vuvuzela horn” according to the Telegraph.)

Although we have cicadas outside our apartment that start up around dusk each night, they fortunately shut up before bed time. (And even if they did not, they’d still be more welcome than a Huntsman spider!)

[Picture from Wikipedia article on Cyclochila australasiae a.k.a. the Green Grocer - “one of the loudest insects in the world”.]

Posted by Richard Edwards at 19:11