Wallace was not forgotten and Darwin did not cheat him 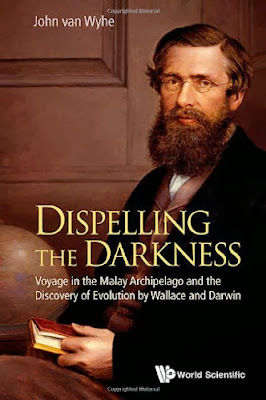 A while ago, I watched - and really enjoyed - Bill Bailey’s Jungle Hero about Alfred Russell Wallace, the “co-discover of Natural Selection”. (I’m not sure why, like assassins of American Presidents, Wallace always has his middle name used.) It was an excellent two-part documentary in which Bailey retraces some of the steps of Wallace in his epic and life-changing - in fact, world-changing - expeditions through Borneo and Idonesia that resulted in the publication of his joint paper with Dariwn in 1858, On the Tendency of Species to form Varieties; and on the Perpetuation of Varieties and Species by Natural Means of Selection.

What annoyed me a little, however, was the degree to which the show seemed to buy into two legends about Wallace and his relationship with Darwin: (1) Wallace was forgotten whilst Darwin took all the credit, and (2) Darwin somehow cheated Wallace out his due recognition. As far as I can tell, neither is really the case.

Perhaps I have a twisted view of things as an evolutionary biologist but, even before this year’s activities in honour of the hundred years since his death, Wallace has not been forgotten. He is still lauded as a scientific hero among evolutionary biologists, with several key insights attributed to him. As well as a bunch of species, he has had geographical features named after him, including the Wallace Line and adjoining Wallacea, and is known as “the father of Biogeography”. There is a reason that Darwin is given more credit when it comes to evolution - he did come up with Natural Selection first and as it was the theory was largely ignored until On the Origin of Species was published. (It’s worth reading an interesting and informative post at Why Evolution is True by Greg Mayer, Why is Darwin more famous than Wallace?) But more credit to one does not equate to no credit to the other.

I’ve also never really understood the big deal about the chain of events that resulted in the 1858 joint publication. If, the story goes, if Wallace had only sent his idea direct to publication when he first had it rather than sending it to Darwin then it would have been just the Wallace theory of Natural Selection. (Except that Wallace did not use that term, so it probably would have been called something else.) Perhaps. But, equally, if Darwin had sent his theory for publication when he first had it, Wallace would never have thought of it because it would have already been a solved problem before he even went to Asia. It seems that Wallace is more lucky than unlucky to be heralded the "co-discoverer".

Then there is the even stronger claim that Wallace was not just unlucky, but that Darwin actively did the dirty and cheated him. Apart from the fact that this does not seem to fit with all the evidence that Darwin was an honorable and kind gentleman (included the friendship between Wallace and Darwin), I always thought that if he really wanted to do the dirty on Wallace then some “accident” could easily have befallen the letter.

Having said all that, I’ve not looked into it deeply and have often wondered whether it really was just anti-establishment conspiracy theories or whether there was more to it. I was therefore very interested to read John van Wyhe’s Guardian piece last Friday, Darwin did not cheat Wallace out of his rightful place in history. The title says it all really and you can (and should!) read the article if you are interested to know more - it’s not very long.

The reason why John van Wyhe’s viewpoint is so notable is that he is the founder and chief editor of the both the Darwin Online and Wallace Online websites and has studied the source material in depth. He has also just written a new book about Wallace, “Dispelling the Darkness:Voyage in the Malay Archipelago and the Discovery of Evolution by Wallace and Darwin

” - you can read a review in another WEIT post. It looks interesting.

Posted by Richard Edwards at 08:57