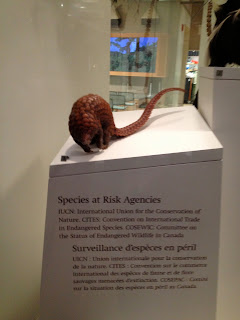 The picture on the right is a pretty shoddy one I took in the Royal Ontario Museum in Toronto (more on that later) to remind me to write a post about pangolins because I think they're great. (There's a better Wikipedia photo by Valerius Tygart, below, of a tree pangolin). This is not really what I had in mind but it will do until I get to write a proper one, as there is currently a Care2 petition to the Prime Minister of Vietnam to crack down on the illegal trade in pangolins. It's not just rhinos that are endangered due to the supposed healing qualities of their body parts. (Pangolin scales, like rhino horns, are nothing more exotic than keratin - like finger nails.)

I'm not sure how much good these things do but the Thai Prime Minister vowed to end the ivory trade last month following a large WWF campaign, so it can't do any harm. Look at this guy and tell me that the world wouldn't be diminished without him* - then sign the petition:

*In the interests of full disclosure: (a) the tree pangolin shown is not one of the two threatened species - the Sundra pangolin and the Chinese pangolin - in Vietnam, and (b) I don't know if it's a he.