Avenged Sevenfold - my kind of Nightmare for Halloween 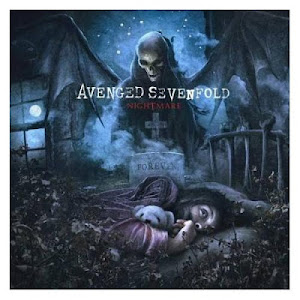 Not as cute as black cats but it seemed appropriate to make a Halloween post about an album with death and graves and stuff on the cover. I've already covered Rage (although I notice that Blogpress has eaten my pictures) so now is the turn of a band that are a much more recent discovery for me but remind me somewhat of the Scandinavian riffmonster rockers: Avenged Sevenfold and their most recent offering, Nightmare, which is my album of the moment. (I only got it last week.) 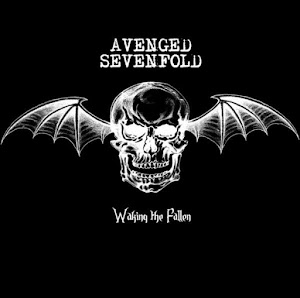 Avenged Sevenfold (or A7x to fans, as I now consider myself,) were recommended to me by a good friend. I was a little put off by the first album I got through emusic, Waken The Fallen as the vocals tend a bit too much towards screaming for my tastes in places (although the music still rocks) but I was reliably informed that it gets more rocky and less metalcore as the albums progress. It's true, and Nightmare is a fantastic collection of tunes for those who like crazy drums and wild fret-wanking guitar riffs - as well as good tunes, of course. (I do!)

Besides, how can you go wrong with a band whose lineup consists of M. Shadows (vocalist), Synyster Gates (lead guitarist), Zacky Vengeance (rhythm guitarist) and Johnny Christ (bassist). Their (replacement) drummer for Nightmare, Mike Portnoy, needs to do something about his name if he's going to join the band on a permanent basis!
Posted by Richard Edwards at 07:29