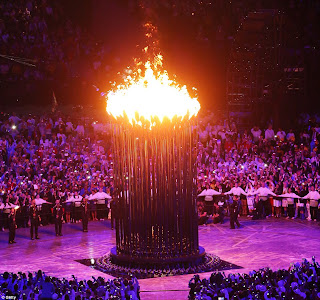 I'm ashamed to say that I was still stuck in cynicism when the Olympic torch was going round the country, so I didn't really pay it much attention. Looking back, I am not really sure why this was. I suspect that it was a combination of not really enjoying the last two Olympics that much and the standard negative press coverage of everything that went wrong in the build-up without really stressing all the good bits. (I wish the media would cheer up sometimes!)

Despite this, we probably would have gone and seen it come through Southampton had it not been raining so hard at the time that we decided to give it a miss. (Although fantastic in the Paralympic Opening Ceremony, watching a collection of umbrellas is not so fun in real life.) Instead, my only real exposure was the torch relay bunting. (After the Royal Wedding, Jubilee and Torch Relay, I am now thinking that we should always have some form of bunting up. It's so cheery!) 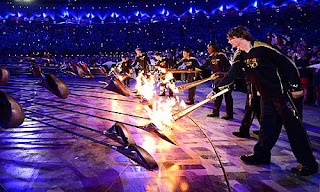 By the time David Beckham arrived at the Olympic park with the flame and passed it on to Olympic legend, Sir Steve Redgrave, however, I was well and truly on board. Literally passing the torch to nominated youths as part of the "Inspire a Generation" theme was a really nice touch, I thought.

I enjoyed most of the Opening Ceremony but, for me, the real star of the whole show was the Cauldron. Indeed, as the memory of the event fades, this sense just increases. Like many, I had been slightly confused by the copper "petals" the different countries had been bringing in but when it all became clear and each one was lit, it began to make sense. There was still a slight hesitation in my house - there should be a single flame but then as the individual arms raised and the cauldron assembled, it was a thing of really beauty. (And pretty impressive engineering!) 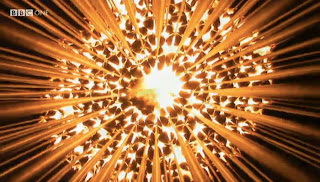 In general, I enjoyed the Paralympic Opening Ceremony more and the cauldron was just as beautiful the second time. This time it was more like a favourite song that a band saves for the end of the show. We all knew it was coming but wondered when and how it would be delivered. The arrival of the torch into the stadium was perhaps more impressive than the Olympic ceremony - a Royal Marine flying in by zip wire from the tower next to the stadium. Having Britain's first paralympic gold medal winner light the cauldron was very different from the Olympic ceremony but equally special in its own way. As with much of the ceremony, I was impressed.

Both Opening ceremonies had elements celebrating British contributions to science and technology and I think that the Olympic cauldron captured that element perfectly. Well done to Thomas Heatherwick and all involved with making "Betty"!
Posted by Richard Edwards at 02:27