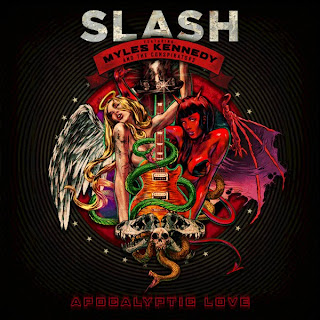 When I bought my MacBook and received an iTunes voucher with it, I am not ashamed to say that the first thing I bought with it was the most recent offering from that most excellent of British rockers, Slash. I've previously endorsed Ain't Life Grand from when he was part of Slash's Snakepit and, I must admit, I am a general fan of his. Not everything that came out of the Snakepit, or Velvet Revolver (or Guns 'n' Roses for that matter) is fantastic but every album I own has some gems on it.

Apocalyptic Love raises the bar and has now solidly cemented itself as one of my favourite albums - certainly of the year and probably of all time. It's a grower too, which is always a good sign. If you like Slash at his best, go buy it! Now!
Posted by Richard Edwards at 19:20