"An inordinate fondness for beetles" 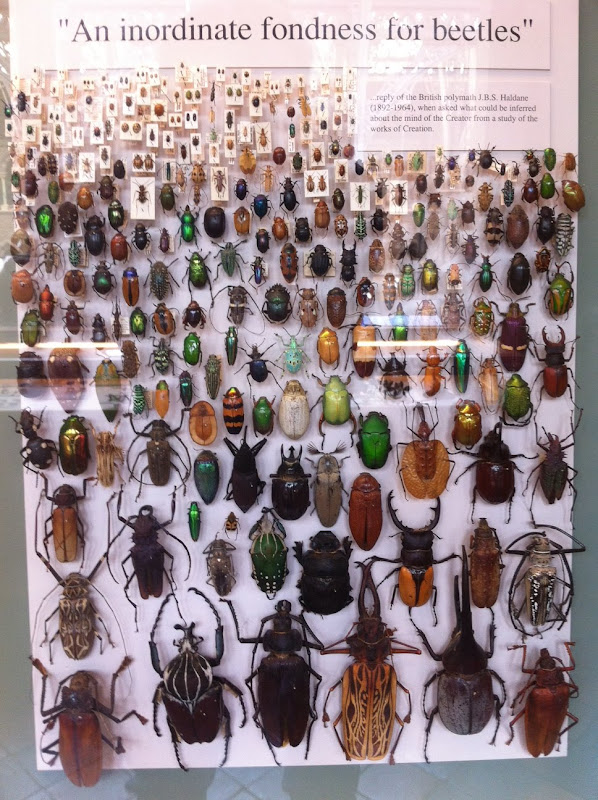 Move over jar of moles, the board of beetles is here! The caption reads:

"An inordinate fondness for beetles" ...reply of the British polymath J.B.S. Haldane (1892-1964), when asked what could be inferred about the mind of he Creator from a study of the works of Creation.

Yesterday, we went to the Oxford University Museum of Natural History. More on this fantastic museum in a future post but one of my favourite exhibits was this board showing just a fraction of the vast array of beetle species.

Just one of the many, many, many things that taking the Biblical Creation myth literally fails to explain is the (literally) awesome diversity of beetles. (Over one fifth of all described organisms - at least before Metagenomics came along - are beetles.) Haldane's explanation seems to be the only viable one and yet this is sadly out of kilter with the rest of the narrative - I don't remember beetles featuring in the Bible at all, and certainly not as major players in parables etc.

Still, the important point is not so much the paucity of that account, so much as how much diversity of form and function can evolve from the same basic body plan - just one of the many awe-inspiring displays in this fantastic museum.

Of course, evolutionary biologists have no specific explanation for why there are so many beetle species, although suggestions have been made. It is certainly entirely consistent with evolution, though: it stands to reason that some body plans will be more versatile than others and, due to the underlying genetics of development, more prone to morphological phenotypic change. It also stands to reason that some lifestyles and features - such as small size, versatility, and flight - are more likely to frequently open up or encounter new niches than others. Put the two together, and you have 350,000 beetles species and counting! (And a lot more if you widen this out to include all insects, which together make up over 90% of known animal species.)

As to the nature of the diversity... Understanding the evolutionary history and selective pressures behind all 350,000 plus species will keep Naturalists busy for a long time! (You'd probably have to be an omnipotent immortal being with an inordinate fondness for beetles to stand a chance!) Some are quite obvious, as they are clearly camouflage or other adaptations that help exploit their particular niche. Others, such as the Stag Beetle's "antlers" are likely to be driven by sexual selection. It also cannot be ruled out that many of the specific morphological traits have initially spread or become fixed purely by random drift. (Some would argue with this - another discussion for another day.)

For now, though, just marvel at one of the wonders of nature! (I'm not sure how many beetle species there are on that board precisely but I estimate it's around 300 - imagine 1000 or more of these boards, side by side!)
Posted by Richard Edwards at 20:27