Why Evolution Is True 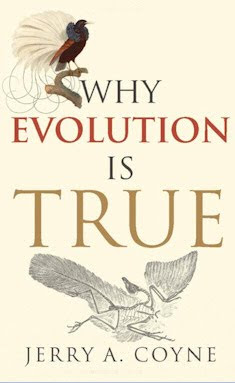 "Why Evolution Is True" is a book by Jerry Coyne, which gives (in my opinion) a fantastic summary of the evidence for evolution and certainly the best book of its kind that I have read. (Although somewhat of a fan, "The Greatest Show on Earth" by Richard Dawkins was quite disappointing in this respect. Dawkins may be the master at explaining how evolution probably happens but Coyne is the master of explaining the evidence that it happened.)

WEIT is also the blog/website of Jerry Coyne on which, like Dawkins, he fights the fight for rationalism and scientific accuracy against the misunderstandings and misinformation of the religious. There's a bit too much religion-bashing for my tastes but then I don't live in a country where 46% of people believe that "God created human beings pretty much in their present form at one time in the last 10,000 years or so" and, as an evolutionary biologist, I can see how that could get tiring and depressing in equal measure.

The WEIT website also has a fair smattering of science, including this recent post that, like the book, gives a clear summary of some of Jerry Coyne's own area of specialisation, speciation - and goes after some ID "intelligence" with characteristic bluntness at the same time. A good one to bookmark in case of future need. Evolution: it happened.
Posted by Richard Edwards at 06:36