Yesterday, I read something in the "i" that made me angry. For anyone who has missed it, presumably by misfortune of not having access to BBC, Frozen Planet is an amazing series, with spectacular footage and Sir David Attenborough at his narrative best. But, it seems, not everything on the show was quite as it appeared. Some of the polar bear footage of mother and newborn cubs was shot in a zoo. 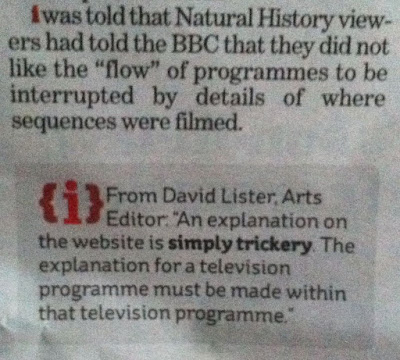 No, this is not what made me angry. It seems that, for some strange reason, this revelation - revealed by the BBC themselves on their website - has cause furores in some circles, with cries of deceit. The Arts Editor of "i", David Lister, sticks in his own oar, saying: "An explanation on the website is simple trickery. The explanation for a television programme must be made within that television programme." The only insight provided here is that David Lister is a man with a very poor sense of perspective. Apparently, "i" stands for "idiocy" or "ignorance".

The show features a "Freeze Frame" section at the end, where they show some of the behind-the-scenes action getting the footage. For anyone paying any attention, it is blindingly obvious that the footage of animals is sometimes used out of context to aid the narrative. It would not be anywhere near as interesting otherwise. But this is not deceit, or "simple trickery", it's just good film-making. Don't tell David Lister, but some of the action used time-lapse photography - the sun didn't really speed up and circle the Earth in a few seconds.

Seriously, folks! Anyone who takes umbrage at this and thinks it should have been somehow made obvious in the program has missed the point of nature documentaries big time and doesn't deserve the genius of Attenborough and the BBC wildlife units. Ridiculous.