Having moved overseas, I’m no longer registered to vote in the UK election. This is probably just as well, as I’m not sure that I really want any of the politicians on offer. However, they are the only politicians on offer, and one of them is going to lead the country. Therefore, if you’re eligible to vote then, as the British Humanist Association said in a recent email:

However you vote, just make sure you vote!

Democracy is an important value for humanists.

Democracy is a vital part of good politics: the enterprise of free individuals having their say in how they want their society governed. In the UK, general elections for the Westminster Parliament are an opportunity for citizens to exercise their democratic freedoms. After all, democracies function at their best when as many of us as possible make use of the right to vote.

Of course, you’ll read up on all the different issues and weigh up the ones which matter most to you. But whoever you decide to support – or however you feel about the state of politics in Britain – we would urge you to go out and vote for the vision of our future you believe in on Thursday 7 May.

If you are still undecided, here’s the BHA’s guide to what the parties stand for with respect to some important humanist issues: 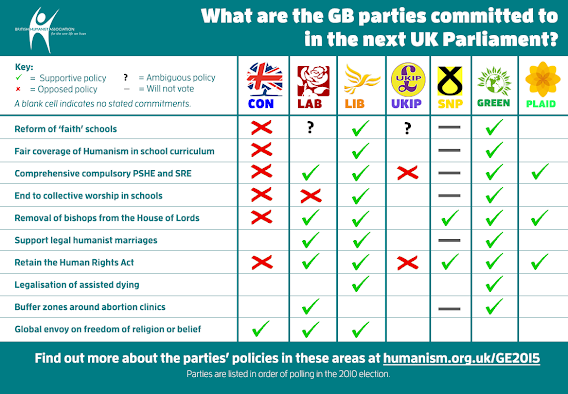 Despite their cowardly u-turn on tuition fees after the last election, I think that the Libdems would still have my vote. I’m not sure that I trust them but then I don’t trust the others either, more’s the pity. The Greens would be a close second, I guess. No prizes for guessing who I would not be voting for.

Posted by Richard Edwards at 08:42