There's nothing scary about the Spice Kittens 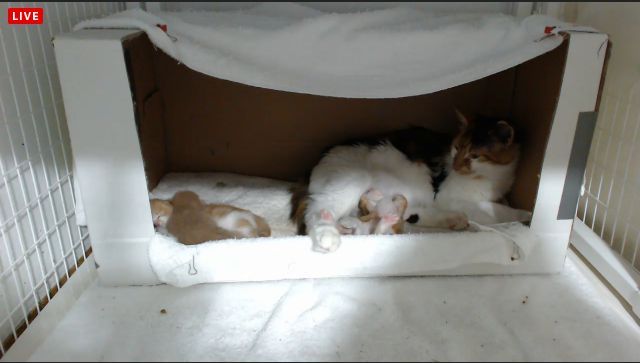 It's Biology Week, so what better excuse to spend some quality time watching kittens! Thanks to felid-fancier Jerry Coyne at WEIT, I was alerted today to the presence of the Spice Kittens Live Webcam. Worry not, for though there is a ginger one, this has nothing to do with the Spice Girls:

Rosemary, a stray, gave birth to her kittens October 5th. She is estimated to be two years old. The two orange boys are Basil & Mace. The buff boy is Sage. The B&W girl is Nutmeg.

Cat coat genetics are actually quite complicated but we would know that Rosemary was (almost certainly) a dam (a lady cat) even if she had not given birth to kittens because she is calico. Calico cats are an interesting (and pretty) example of what is known as X-inactivation.

Cats, like all mammals (including us) have genetic sex determination. (Not all animals do. For some it is temperature dependent or they can even change sex during their lives - see "Finding Nemo's sex-changing father", for example.)

Genetic sex determination does not necessarily need sex chromosomes (yeast manage with a single mating type locus (gene)) but in cats (and humans) it is determined by a pair of sex chromosomes. (A single pair of sex chromosomes is normal. The platypus has five pairs!) These are the famous "X" and "Y" chromosomes, pictured right. (Human ones but cats are probably quite similar.) As you can see, the Y (right) is a runty little thing compare to the elegant and well-formed X - and this is where X-inactivation comes in.

The problem is that, with the exception of some short regions at each end, the Y chromosome is missing most of the genes that sit on the X chromosome. This means that a female (XX) has two copies of these genes and males (XY) have only one. This in turn would mean that a female cell would produce approximately twice as much of the products of these genes. Gene dosage is often important: rather than the absolute level of something, it is often the ratio between two things that is important. To compensate for having two copies, therefore, the cells of female mammals switch off one of the copies. This is "X-inactivation".

Because it is random which X chromosome gets switched off, this can lead to some interesting chimeric patterns, including that of the calico cat coat. This in turn is because one of the main coat colour genes - the "ginger gene" - is on the X chromosome. The parts of the calico cat that have a functional ginger gene are like a ginger cat and the parts that inactivate this copy but instead have the recessive "black and white" variant are like a black and white cat. (An extra complication is the status of additional genes that determine how much white patterning there is.)

This also explains why two of the male kittens are ginger - they have inherited their Y chromosome from their father (no ginger genes) plus a random X chromosome from their mother - the ginger one in the case of Basil and Mace. I cannot quite work out whether Sage also has the ginger gene but it has been "diluted" by another coat gene, or whether he is a different colour variant. (The girl, Nutmeg, is a more simple black and white.) The other complicating factor with kitties is that different kittens in a litter can actually have different fathers, so the variety of coat colours within a little can exceed all the possible combinations of one tom and one dam. (It also means that I don't think we can use the colours of the Spice litter to work out what colour the fathers were, except that Nutmeg's father was not ginger.)

Anyway, I am pretty sure that watching kittens is good for your mental health (and you can't catch Toxoplasma gondii online) so do have a little look when you have a spare moment and ponder X-inactivation, study animal behaviour, or just admire their kittie cuteness! (I'm not sure how long the live stream will be up but I will try to remember to update this post if it disappears.) [Edit: The girl kitten now seems to be called Pepper.]