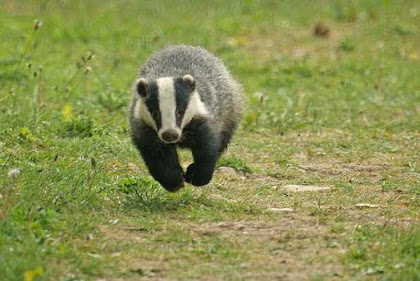 As it's Biology Week, I was intending to only blog about biology matters this week. I did not, however, envisage starting things off with a post about such a flagrant disregard for biology in the form of the UK government's planned badger cull.

As reported in the BBC, this "mindless" cull currently set to go ahead despite both a massive e-petition (of which I proud to be a signatory) and, now, a letter to the observer signed by 31 top scientists:

"Bovine tuberculosis is a serious problem for UK farmers, deserving the highest standard of evidence-based management. The government's TB-control policy for England includes licensing farmers to cull badgers. As scientists with expertise in managing wildlife and wildlife diseases, we believe the complexities of TB transmission mean that licensed culling risks increasing cattle TB rather than reducing it.
...
We recognise the importance of eradicating bovine TB and agree that this will require tackling the disease in badgers. Unfortunately, culling badgers as planned is very unlikely to contribute to TB eradication. We therefore urge the government to reconsider its strategy."

These are not new revelations to the government and it is saddening to see them ignore both a large number of the population but, more importantly, such a large number of top scientists. This is not just about not killing badgers, although that is obviously important. This about a government going ahead with an inadvisable course of action that will quite probably make the situation worse just because of pressure from the National Farmer's Union.

Most tellingly, one of signatories was Lord Krebs, the designer of the original badger cull experiment, who was previously quoted by the BBC as saying:

"I have to say I've not found any scientists who are experts in population biology or the distribution of infectious disease in wildlife who think that culling is a good idea. People seem to have cherry picked certain results to try and get the argument they want."

Another was Professor John Bourne, who was in charge of analysing the data as Chairman of the Independent Scientific Group on Cattle TB, and was equally damning with his conclusions:

"As far as badger culling is concerned it has nothing to offer in terms of controlling TB in cattle, and could indeed make the situation worse."

"No-one wants to kill badgers but the science is clear that we will not get on top of this disease without tackling it in both wildlife and cattle."

The scientists are clear of "the importance of eradicating bovine TB and agree that this will require tackling the disease in badgers" but culling is not the way to do it. Even assuming that it is true that "no-one wants to kill badgers", you can't just pick and choose the things that "science is clear" about that you like (or are popular with your friends) and ignore the bits you don't. As the effects of climate change continue to be felt, we need a government that has the courage to listen to the science, whoever that might upset.