We have a bit of situation 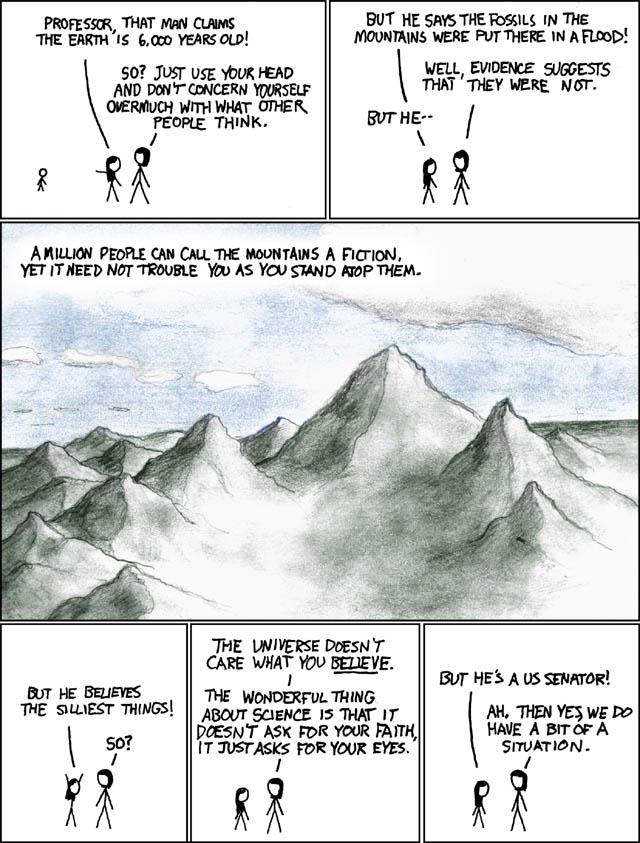 This genius cartoon is doing the rounds on Facebook thanks to I f**king love science. It's originally from XKCD. Despite the clear parallels with the recent Paul Broun nonsense, it's actually a pretty old one.

The problem is, the Universe not caring what we believe is not always a good thing. Take Mitt Romney's poor grasp of climate change, for example. We're in big trouble whether Romney thinks that we (or, more precisely, America) should do anything about it, or not.

The USA is one of the most technologically advanced nations on Earth and yet, despite this, some of its leading politicians are not only science illiterate but they seem to wear that illiteracy with pride, like some kind of badge of honour. That someone like Paul Broun can end up on the USA's House Science Committee (along with fellow Republican, Todd Akin) would be funny if it wasn't so downright disturbing.

I don't know what scares me more: the possibility of another Republican US President or the fact that it's even a real possibility that someone like Mitt Romney could end up wielding that much power. If US politicians do not wake up about Climate Change - and debate the issue at least - I fear that we are going to have a lot more than "a bit of situation".
Posted by Richard Edwards at 09:09