Like many of my generation, I am big Star Wars fan. I watched the original films more times than I care to remember and many more times than I care to admit. I probably went through half my teenage years able to recite the entire script to Star Wars (or A New Hope if you must) - including sound effects. I played Star Wars: The Roleplaying Game (the original one) and kicked ass at X-Wing on the PC. I was a Star Wars nerd. 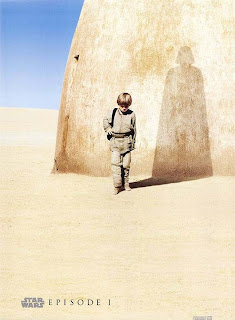 Also like many of my generation, I was less enamoured by the prequels when they came out (although I should have seen the warning signs in the Special Edition trilogy - Han Solo shoots first for crying out loud. Grrrr. (Let it go, Rich, let it go...)) The Phantom Menace in particular was pretty terrible, however much the fan in me tried to be convinced otherwise. I really wanted it to be good. But it sucked. Darth Maul was pretty cool (except his death, which was pretty lame,) but the young Anakin was terrible, Jar-Jar Binks was really terrible, Midi-chlorians were beyond terrible and, perhaps worst of all, the whole script was a shocker. The only good thing about Episode I was the number of fantastically therapeutic spoofs it has spawned, especially at the hands of Robot Chicken (e.g. here and here). Well, that and the poster with the young Anakin and the shadow of Darth Vader.

My own fix to The Menace was to watch the DVD and just fast-forward all the bits I really didn't like, which was basically every time Jar-Jar or Anakin were on screen (except the pod race, which had good sound effects). This, and excising the Midi-chlorian scenes, actually works surprisingly well at turning The Phantom Menace into something quite watchable (and shorter) even if the already weak plot of that particular movie is watered down further still.

Rod Hilton on his blog, Absolutely No Machete Juggling, goes one further and has a plan for fixing the series with The Star Wars Saga: Introducing Machete Order His recommendation:

"Next time you want to introduce someone to Star Wars for the first time, watch the films with them in this order: IV, V, II, III, VI"

As well as re-ordering the films to safeguard some of the plot twists that the prequels ruin mightily, he excises Episode I altogether.

"Episode I is a failure on every possible level. The acting, writing, directing, and special effects are all atrocious, and the movie is just plain boring. Luckily, George Lucas has done everyone a favor by making the content of Episode I completely irrelevant to the rest of the series. Seriously, think about it for a minute. Name as many things as you can that happen in Episode I and actually help flesh out the story in any subsequent episode. I can only think of one thing, which I’ll mention later."

I won't go into the rest of the reasoning here but will instead recommend that you scoot over to Rod's blog. It's an old post (November '11) and quite long but if you are a fan (or were) and you've not come across it before, it's well worth a read. I've not yet tried out Machete Order myself but will be remembering it should I ever need to introduce someone to Star Wars in the future.
Posted by Richard Edwards at 22:35