Dodgy Christmas cracker jokes are a Christmas tradition. Apparently, the jokes are deliberately bad. The alleged psychology behind this is that everyone groans and gangs up on the joke, thus are unified by their common disdain for the poor pun. If, on the other hand, the joke showed true wit and humour then it is highly likely that some people would not understand it and/or simply find it unfunny, thus creating a schism between those who get the joke and those who don’t.

It’s an interesting theory and I am not sure who first told me of it nor from whence it originated. What I am sure of, however, is that even the bad jokes need to be told in the right culture to stand a chance of doing their job. We had our departmental Christmas party yesterday (on a boat in the harbour and very nice too) 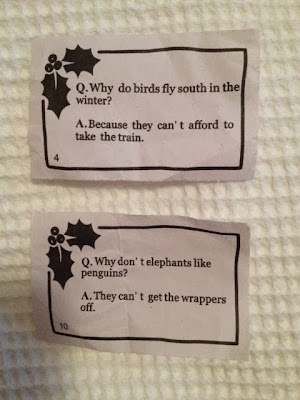 but the crackers had clearly been imported from the UK and did not work Down Under.

The first one is not so bad. Presumably, Australian birds would migrate north for the winter but I think the meaning is still clear even if the geography is confused. The latter, however, completely fails on the basis that the penguins referred to do not exist here. There is a similar biscuit - the Tim Tam - but it is superior to the humble penguin and possibly why the latter has never taken off.

Even without the carbon footprint considerations, importing your crackers from halfway round the world is not a good move.

Posted by Richard Edwards at 22:16