iPlan with Onzo revisited (and not recommended) 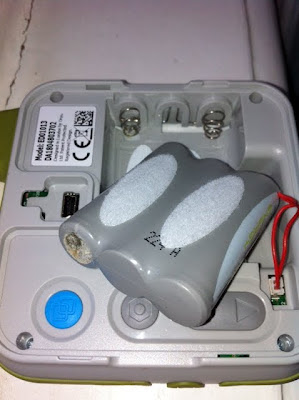 I've blogged before about our iPlan energy kit and now that another few months have passed, it's time for an update. Sadly, it's not a good one this time.

Back in April, our receiver died. Opening up the panel, we found that the rechargeable battery had all corroded. When I contacted Southern Electric, they were happy to replace to unit. Good. What was not so good, they informed me that they were aware of the design fault and, as a result, no longer shipped the kits with rechargeable batteries. Perhaps they could have warned users?

The next problem was that, although they did send out a replacement, they did not do it particularly speedily. Judging by the material that came with the replacement kit, which had no mention of being a replacement, I was just added to the new customer schedule and, as such, had to wait a few weeks for it to arrive. As a result, we now have a nice big gap in our usage stats, which is not that great for trying to look at annual consumption as it clearly changes with season. It also neglected to point out that, even though only the receiver was broken, the sensor also needed to be replaced.

This was only a minor irritation and sorted out eventually through trial and error. The major irritation is that, now that it is all set up, the new receiver does not display the current power use properly. There is a obviously a loose connection or something, as squeezing the top a little sort out the problem (temporarily). It does not affect the uploading of data but it does limit the utility of the unit - as does keeping it plugged in to avoid using up the non-rechargable batteries it now needs. 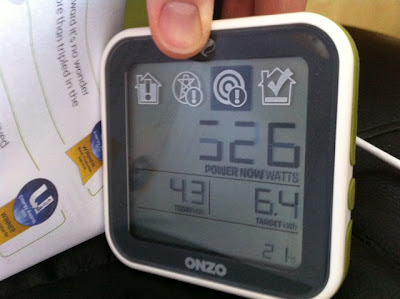 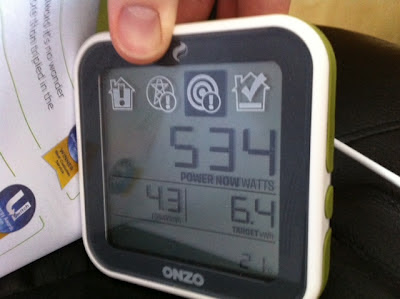 Although I know that two faulty units might just have been bad luck but it doesn't exactly inspire confidence in the design or build quality of Onzo energy kits.
Posted by Richard Edwards at 08:09