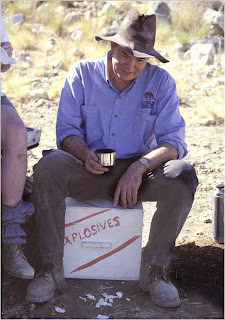 When one pictures fossil hunters, one normally imagines someone carefully chipping and brushing away at some exposed rock. The picture that springs to mind is rarely someone sitting on a box of explosives. With Professor Mike Archer at UNSW, however, that’s exactly what you get.

I first found out about Mike’s extraordinary approach to fossil hunting at the UNSW family BBQ a couple of weeks ago. As described in the Australian Wildlife notes on Riversleigh, a world heritage fossil site in north-western Queensland: (my emphasis)

As water dissolves the rock, bones and teeth can be seen protruding from the rock. Releasing them from the rock is not so easy. Quarrying techniques must be used, including the occasional use of light explosives. Many of the areas are so inaccessible that the larger rocks have to be broken up with sledge hammers, bagged and labeled and lifted out by helicopter.

Once they finally reach the laboratory, the fossils are freed by dissolving away the surrounding limestone with dilute acetic acid. After treatment with preservatives, the fossils are then ready for study by scientists.

This approach has reaped rewards, including the recently reported giant toothed platypus fossil.

Another example of dramatic palaeontology doing the rounds is the amazing set of dinosaur footprints in a Bolivian quarry, which presumably were unmasked by something similarly explosive.

Opponents of evolution often point erroneously at the gappy nature of the fossil record, conveniently ignoring that not only do past organisms need to have been subject to the relatively rare conditions that result in fossilisation but then that bit of rock needs to be exposed again and then someone needs to find it before it’s destroyed! Given of all this, I think that the fossil record is actually remarkably complete! (Not to mention, of course, that even as more and more fossils get added, the fossil record is entirely consistent with evolution and extremely inconsistent with a recent global flood or Young Earth Creationism.)

Posted by Richard Edwards at 20:20