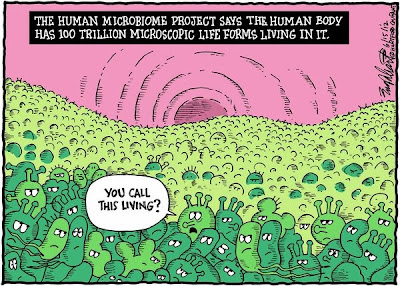 The old adage that “you are what you eat” is not really true unless you are thinking at an atomic level. Even here, a lot of stuff passes straight through you or is absorbed only to be filtered out again because it is toxic and/or you have too much of it. The exception, perhaps, is bacteria.

Bacteria get a bit of a rough ride from most humans, largely because most of the bacteria that we have been historically aware of - and interested in - have been harmful to our health. Apart from saving humanity from the Martians, what have bacteria ever done for us? Well, lots to be honest and we certainly wouldn’t be here without them. Not just that but we would be without them. 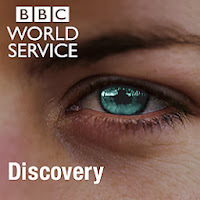 As highlighted in this week’s BBC Discovery podcast, one of the most important realisations of the past few years has been the importance of what we call the “human microbiome”, i.e. the total microbial (e.g. bacterial) complement of the human ecosystem - and an ecosystem is exactly what you and I are. The idea of a human navigating his or her way through the world as an individual animal - occasionally under attack by parasites - is an idea that is pretty firmly fixed in our sense of self but it is really a falsehood.

The “friendly bacteria” of yakult etc. have popularised the notion that not all bugs are out to get us and that some of them are actually our allies but I still think that most people are probably unaware of the role they play and just how crucial they are to our health (and, when things go wrong, ill health). In many ways, an individual person is more bacterial than human. Not in terms of biomass, it is true, (for bacteria are small) but in sheer numbers the microbes have it: 10 trillion cells may sound like a lot but there are approximately 100 trillion bacteria in the average human. A lot of fuss has (rightly) been made of the Human Genome Project but a human only has around 21,000 protein-coding genes plus a whole bunch of non-coding ones making a total somewhere in the order of 100,000 different genes (no one knows for sure yet). The diversity of bacterial genes in your body is harder still to measure but is estimated to be 100 times this number at around 10 million. (An individual bacterium has far fewer genes that a human cell but there are many different species/strains of bacteria living within you.)

These bugs are important too and play critical roles in priming your immune system, defending you from other unfriendly bacteria and, perhaps most importantly, helping you to digest your food. Indeed, the biggest concentration of bacteria is in the intestine and the population here is heavily influenced by diet - part of the reason that a major shift in diet can cause some upsets down there. Furthermore, evidence now links a healthy gut population with a healthy person, and poor diets have been implicated as possible contributors to poor health beyond simple nutritional deficits. As a consequence, fecal transplants are now being touted as possible cures for all sorts of gastric conditions.

So next time you find it hard to motivate yourself to have a varied, balanced diet, spare a thought for your microbiome!

[Picture from matt over matter, where you can read even more about the human microbiome.]

Posted by Richard Edwards at 23:00