Turning to the Dark Side 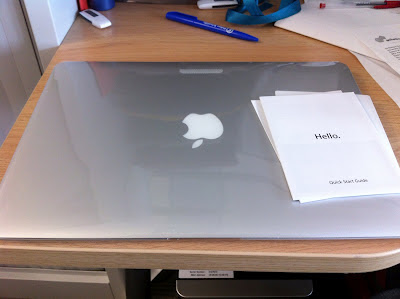 So, I have finally joined the Dark Side and bought myself an Apple computer. One of the new MacBook Air laptops in fact. And it's lovely! (Hello!) I know that not everyone will agree with my casting of Apple as the Dark Side. For years, Microsoft seemed to be the corporation that everybody loved to hate.

Microsoft never achieved the monopoly of Apple, though. With a PC, you could change components yourself, therefore benefiting from a free market. The same even applies to operating systems - if you really hate Microsoft, put Linux on your PC. (I did recently on my little Dell netbook after the upgrade to Windows 7 at work made it utterly useless.) Different hardware. Different software. Different strokes for different folks. PCs were the computers for the real geeks.

Apple, on the other hand, made pretty gadgets but always seemed greedy. Oh, you want to connect one of our devices to the rest of the world, not to another one of our devices? That'll be another £15 for a special adaptor, please. Want to upgrade your memory? Well, you'll have to get that from us too. Etc.

On the other hand, there is something to be said for a monopoly. Apple control their products. There's none of the PC irritation of buying a game only to find that the two hundred different graphics cards supported does not include the one you have or that, for unknown reasons, your particular motherboard/memory/hard drive combination just doesn't seem to work together as well as the individual numbers would suggest. Then there are all the things claiming to speed up your system, or clean your registry, or check for viruses and spyware and yadayadayada. When I was young, I enjoyed finding out about this stuff but it doesn't seem like such fun anymore. An Apple, in contrast, just works. And if it doesn't, there is one person to blame: Apple.

Luke: Is the dark side stronger?

I still think I am a geek but maybe I am getting old, or computers are just a lot more complicated than they used to be, but these I want something where everything just works! And boy, does the new MacBook Air work! Everything about it is a joy. Lovely to look at, lovely to use. I'm still getting used to the different short-cuts and the like, and no delete key (only a backspace - Fn+BACKSPACE is the PC "delete", by the way) but, on the whole, I am really liking what I see. Best of all, there's no stupid Windows compatibility or performance issues. So far, at least. (I am still in the Honeymoon period and even Windows 7 takes a while before it seems to grind the whole system to a halt at random.)

Someone accused me recently of becoming an Apple advert (I'm already in the iPhone and iPad fan clubs) and I think I may be just about there! My only real criticism (other than dark rumours about the usual shenanigans of a multinational giant that is bigger than many countries) is the usual cable nonsense. Happily, I don't really intend to plug my MacBook into anything other than USB devices - this is for play, not work, so no projector connection or PowerPoint issues for me!

Will I ever go back to a PC, now I have tasted the Apple? It's early days. I am yet to try any programming on it, or see if MS Office works (including Excel Macros) but early indications are probably not. They say that "once you go Mac you can't go back".

Once you start down the Dark path, forever will it dominate your destiny.

Posted by Richard Edwards at 18:34