Forget brains, we should be throwing all our money at Climate Science

2013 saw some unprecedented levels of funding being directed towards “ambitious” (read “impossible within the budget”) projects to map and simulate the human brain, with $100 million and €1.6 billion been thrown at these challenges, respectively. There is no denying that brains are important but, only a month after the $100m BRAIN Initiative was announced, 2013 also saw atmospheric carbon dioxide levels exceed 400 ppm for the first time in at least 800,000 years.

This is pretty stark as it is when you look at the Mauna Loa data, being such a sharp and large increase that it can barely be discerned: 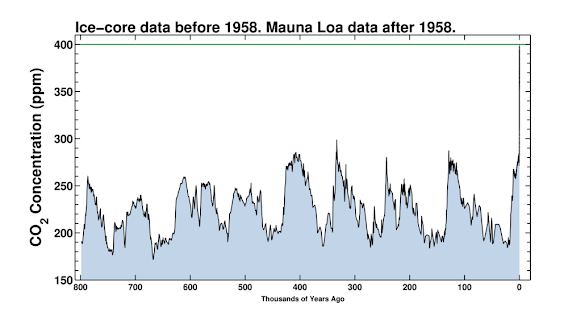 Or zoomed in to hit home what we have been doing since the Industrial Revolution: 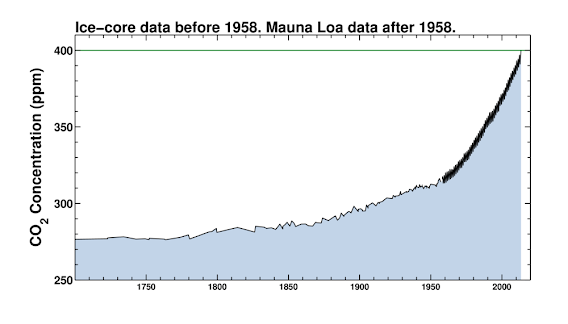 Climate skeptics would have us believe that this is natural and/or doesn’t really matter. After all, they say, it’s not the highest CO2 has ever been and life did all right back in those high-CO2 days. The thing is, though, even if you disagree with essentially every climate scientist in the world that Climate Change is man-made, it really does matter and life may have done all right at such levels but not life as we know it. For humanity - and all the organisms on which humanity relies - we are going into uncharted territory in both atmospheric CO2 and, perhaps more importantly, global temperature as this great infographic from the World Bank hammers home to startling effect: 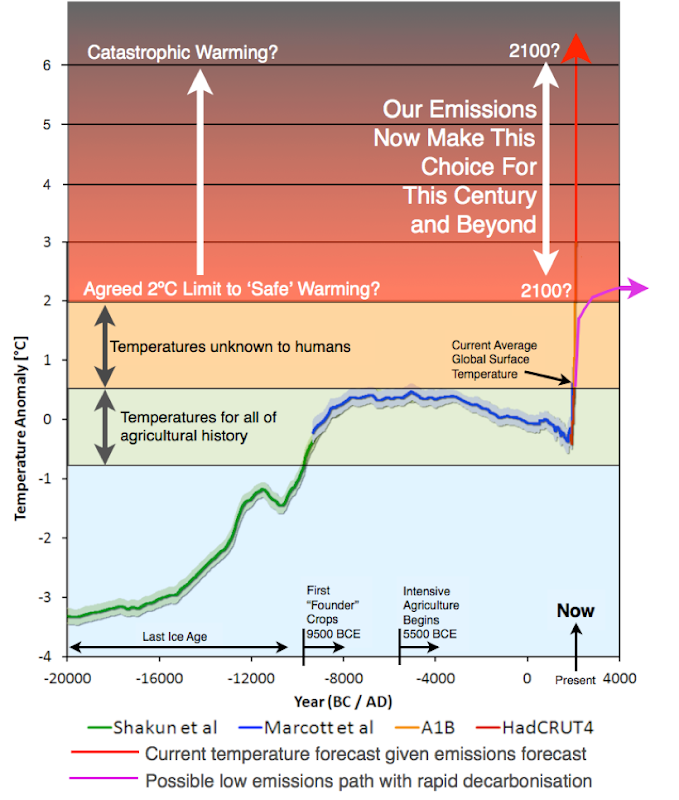 I was tipped off to this image by a tweet from Alessio Fratticcioli but not yet been able to find the original.

The @worldbank has created perhaps the single most telling chart on climate change ever: http://t.co/qA5z5av3ul pic.twitter.com/lIG2J7a4hY

Here is what they say at the World Bank Climate Change site, though:

“Climate change is a fundamental threat to sustainable economic development and the fight against poverty. The World Bank Group is concerned that without bold action now, the warming planet threatens to put prosperity out of reach of millions and roll back decades of development.

The science is unequivocal that humans are the cause of global warming, and major changes are already being observed. Current global mean temperature is about 0.8° Celsius above pre-industrial levels. The 12 years from 2001 to 2012 rank among the warmest since record keeping began 133 years ago. The intensity of extreme weather-related events has also increased.

Recent experience is a stark reminder that no country – rich or poor – is immune from the impacts of climate-related disasters today.

The World Bank Group believes a 4°C warmer world can and must be avoided. Immediate global action is needed to slow the growth in greenhouse gas emissions this decade and help countries prepare for a 2°C warmer world and adapt to changes that are already locked in.”

The picture is pretty bleak unless we do something about it fast and, worse than that, we still do not even really know how bleak it is. The East Antarctic ice sheet, for example, holds enough ice to raise sea levels by over 50m (and basically submerge almost every major city on Earth). We think it is stable (for now) but we don’t really know. (Somewhat counter-intuitively, increases in sea ice in the region could actually be indicative of more melting: freshwater has a higher freezing point than salt water and thus melted land ice can re-freeze when it hits the colder ocean.)

Having been peripherally involved in some Climate Change studies, the thing that really boggles my mind is how little funding is being channeled into what must surely be the most important questions for all humanity: is the world going to become largely uninhabitable in the near future and is there anything we can do about it? However important brains may be, I cannot help but think that such large chunks of money could be put to better use.