Whales should not be hunted for scientific research 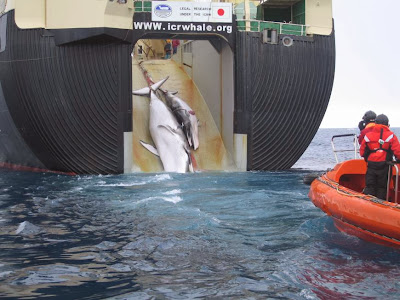 Hunting whales for commercial exploitation was banned in the mid eighties and for good reason: stocks were dwindling and many of the uses for whale parts (oil etc.) are now redundant. Of course, people still eat whales and, not being a vegetarian, it would be pretty hypocritical of me to take issue with that aspect. (At least whales are free range, although I have no idea how humane their actual deaths are.) The problem is that many species of whale are now endangered or vulnerable. With their long generations and slow reproduction, it is clearly not that easy for populations to rebound.

Japan has got round whaling bans by exercising its right to “scientific” whaling. Not everyone is convinced, though, including the Australian government who have recently reported that they will send out a surveillance plane to the Southern Ocean to monitor Japanese whaling ships having previously challenged Japanese whaling at the UN as “commercial whaling in another guise”. The Japanese, of course, deny this.

The thing is, whilst it’s not my field, I cannot think of any good scientific reasons to hunt (and kill) whales at all. An article in the Japan Times last year, “In science terms, Japan has no need at all to kill whales”, agrees:

“Now, it is true that by catching and killing whales, and analyzing their stomach contents, a lot can be learned about cetacean biology. In the past, it was the only real method available to investigate these animals. But for many years now, it has been entirely unnecessary to kill whales in order to get the information that Japan’s Institute for Cetacean Research says it needs. …

Killing whales provides negligible data to science. Less than 1 percent of the papers published on cetacean biology come from studies that required the killing of a whale.”

Ironically, one of the reasons given to the scientific whaling is to get a better handle on their current populations - perhaps not so ironic if the hope is to use that information to remove the whaling ban.

There are some nations, such as Norway, who object to - and have declared themselves exempt from - the International Whaling Commission moratorium. This is bad (although I think they generally target large whale populations) but at least it is honest. I think it is time to ban scientific whaling just as commercial whaling is banned. That way, if a nation wants flout international consensus then at least the genuine motives will be clear.