Last night we had a Syrah/Shiraz wine tasting at the wine club. I had been looking forward to this, as I am rather partial to a Shiraz or Shiraz blend and was expecting to be blown over by some bold, fruity and maybe slightly spicy red wines from the New World.

The format was quite fun and after a couple of "interesting" Aussie Shiraz variants - namely a Rose (OK but I'm not a big Rose fan) and a sparkling Shiraz (Why?!! Yuck!) - we had a series of five Shiraz/Syrah wines tasted blind, with a quiz asking where were they from and how much did they cost. I also rated mine out of ten. I don't normally reveal my tasting notes, such as they are, because my ignorance is great and my wine vocabulary limited. This time, though, I thought I would make an exception: 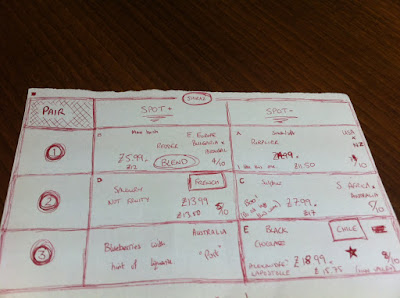 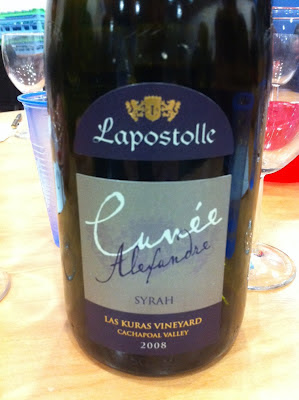 There are a couple of things to note here. One is that I only got a couple right (the French and Chilean) and this was essentially a pair of lucky guesses based on (1) the fact that I generally don't like French wine and (2) I liked "E" the best and figured that Chile could knock out a decent full-bodied red. The Chilean in question was a 2008 Lapostolle Cuvee Alexandre from Las Kuras Vineyard (right). It wasn't my favourite ever but it was cetainly good stuff, almost black in colour and with chocolately smoothness. I'm not sure I would pay £15.75 for it but it might be worth it.

The second thing to note is the generally low scores out of ten that I gave the five wines - 4/10, 7.5/10, 5/10, 5/10 and 8/10. Most disappointing of all was the Australian Torbreck "Woodcutter's Shiraz" (below left), which I have made a note of in order to remember to avoid in future! It was not what I have grown to love and expect from an Aussie Shiraz.

Somewhat more successful was the fortified Shiraz Australian "port" from d'Arenberg (above right). This tasted a bit of blueberries with a hint of liquorice and would probably be very nice after dinner with some dark chocolate. 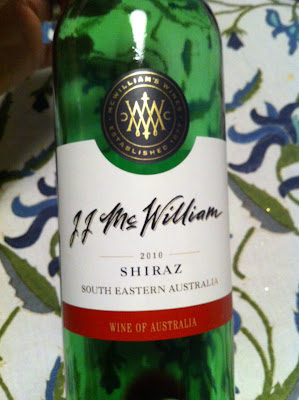 The disappointing aspect of the evening was that in the past couple of weeks, I've had three Shiraz/Syrah or Shiraz blends that, quite frankly, blew everything from last night out of the water. In California last month, we had a fantastic Shiraz from Vermeil Wines in Napa Valley (one for a future blog post), I've already posted about the delicious and bargainiferous Kumala Zenith Merlot/Cab Sav/Shiraz blend and on Thursday, to prepare for last night's tasting, we had a very tasty Australian Shiraz from JJ McWilliam (left).

With the exception of Californian winery tasting sessions, I think I might be sticking to my half-price £10 bottle from the supermarket in future!
Posted by Richard Edwards at 04:04